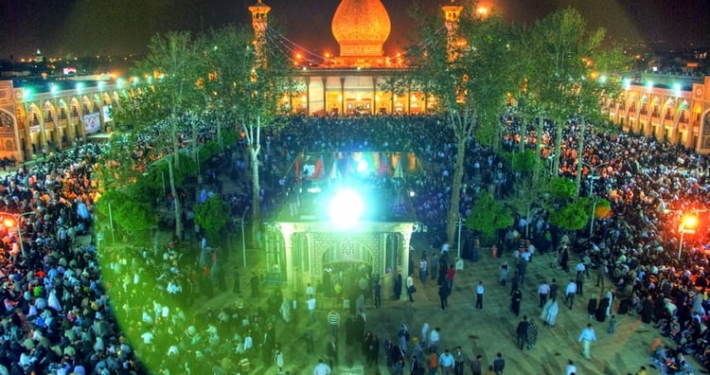 Shah-e Cheragh Shrine is a funerary monument and mosque in Shiraz, Iran, housing the tomb of the brothers Ahmad and Muhammad, sons of Mūsā al-Kādhim and brothers of ‘Alī ar-Ridhā. The two took refuge in the city during the Abbasid persecution of Shia Muslims.

The tombs became celebrated pilgrimage centres in the 14th century when Queen Tashi Khatun erected a mosque and theological school in the vicinity.

He found that the light was being emitted by a grave within a graveyard. The grave that emitted the light was excavated, and a body wearing an armor was discovered. The body was wearing a ring saying al-‘Izzatu Lillāh, Ahmad bin Mūsā, meaning “The Pride belongs to God, Ahmad son of Musa”.

Thus it became known that this was the burial site of the sons of Mūsā al-Kādhim.

Our Reader Score
[Total: 4 Average: 3.5]You must sign in to vote