Shiraz, the city of “roses and nightingales”

Shiraz is the city of love, Persian literature, joy and food!

Shiraz is the capital city of Fars province and a treasure trove of Persian culture. Despite its size, a population of about 1.5 million and an appalling traffic problem, it has retained the relaxed atmosphere of a provincial town, with a university which still retains its reputation.

Many foreign visitors are surprised that the city itself has so few surviving historical monuments when there are such archaeological treasures in the neighbouring countryside, but earthquakes over the centuries have taken a heavy toll.

A settlement from Achaemenid times, it really prospered from the early Islamic era, quickly developing into a walled city. Local disputes between warlords during the 11st—12th centuries caused problems, but Shiraz largely escaped severe damage by the Mongol armies, and its tactical surrender to Timur Leng in 1395 rewarded by great prosperity under his grandson’s governorship.

The good fortune was not to last. In 1668 severe flooding brought death and outbreaks of plague. The citizens had barely recovered when the Afghan rebels, destroying the remnants of Safavid authority, set about massacring the population in 1725. However, under the rule of Karim Khan Zand (d 1779, and still remembered with great affection today) and his descendants, Shiraz regained its former prosperity as the Zand capital for some 20 years in the second half of the 18th century.

Those days of tolerance were short-lived; 15% of the population were Jewish in the early 19th century, but few Jews remain today.

Today it is the place to smell the beautiful Shiraz roses and to buy the perfume and rose-water. Shiraz is also a place to walk in the gardens, see the Azadi Park Ferris Wheel and roundabouts occasionally crowded with excited schoolgirls, their chadors flying in the breeze, or to inspect the carpets in the bazaar.

Here is a list of top 10 attractions in Shiraz to encourage you to pay a visit to and examine this modern and also historical urban center!

One garden surrounds the Tomb Of Hafiz (Aramgah-e Hafiz), the great Shirazi poet (1326—c1390) who wrote lyrical poems about love and the beloved, which are understood to be imbued with deep Sufi mystical meaning; his epithet ‘Hafiz’ alludes to his memorising of the Quran by heart. Because of this association, one or two dervishes still come here on Wednesdays and Thursdays, while families enjoy the small garden and pleasant late 18th-century (hay-khaneh to the far left. Karim Khan Zand ordered a suitable tomb to be built in 1773 to honour this famous son of Shiraz but that was torn down in 1938 to erect the present octagonal kiosk.

Further embellishments were made for the 1971 Pahlavi extravaganza. Enough said. The bookshop here at the left end of the first porticoed terrace often has a good selection of history and art books in English, as well as maps and postcards, but the English translations of Hafiz on sale render the poetry incomprehensible.

Before leaving, why not have your fortune told? For a small sum, a copy of Hafiz’s best-known anthology, the Divan, will be opened randomly at a page, or a canary plucks out a card with couplets; the verses offer a portent to the future. Read more…

formerly a prison, but now an architectural wonder on exhibit. The design of the citadel combines military and residential architecture, for it was the home of Karim Khan and the military centre of the dynasty. Tile works depicting legendary tales were added at the entrance gate of the citadel during the Qajar period.

This beautiful complex contains a vast network of gardens, as well as a colorful palace and a system of small artificial rivers flowing throughout the entire area. Tourists can admire the wonderful flora or follow the little canals’ intricate system. Make sure the weather is sunny before coming here!

it was built during the Qājār era, the mosque has extensively colored glass in its facade, and other traditional elements such as panj kāseh-i (five concaves) in its design. Best to go in the morning for the colorful shades.

Entering Shiraz from the north, the first visible monument is the Quran Gate (Darvazeh-e Quran), originally built in the 10th century in the city walls. It was Karim Khan Zand who ordered a Quran to be placed in the gatehouse so that all travellers would be blessed as they left for the open road.

In the 1950s increasing motor traffic dictated a new road and the demolition of the gate, whereupon a Shirazi citizen paid for its rebuilding in its present state. Halfway up the hillside, above the gate, is the tomb of one of Shiraz’s famous poets, Khvaju Kirmani (d 1352), and one of the eight known Qajar rock-reliefs, cl 824, showing Fath Ali Shah (d 1834) on a throne dais supported by two angels, with two of his numerous sons in attendance.

Recently, these hillsides have been landscaped with terraces, water cascades and the odd kiosk, and a tea house, the Khajou. While they offer unparalleled views of the city lights at night, the tramp noise and pollution are overpowering. Read more…

Nearby, down from the 18th-century bridge, is situated the Ali Ibn Hamzeh Holly Shrine, constructed perhaps in pre-Seljuk times to honour a relative of the fourth Imam. Its two minarets, exterior dome, entrance vestibule and courtyard rooms, however, date from the late 18th and 19th centuries. If, as is likely these days, a visit to Shah-e Cheragh shrine  is not possible during your stay, this shrine possesses similar extensive Qajar mirror work on its interior walls and vaults.

There is one entrance into the shrine sanctuary (women are asked to don a chador) and as the qibla wall is immediately to the right on entry, one should move quickly to one or other side to minimise disruption to anyone praying. Read more…

Shah-e Cheragh Shrine is a funerary monument and mosque in Shiraz, Iran, housing the tomb of the brothers Ahmad and Muhammad, sons of Mūsā al-Kādhim and brothers of ‘Alī ar-Ridhā. The two took refuge in the city during the Abbasid persecution of Shia Muslims. The tombs became celebrated pilgrimage centres in the 14th century when Queen Tashi Khatun erected a mosque and theological school in the vicinity.

He found that the light was being emitted by a grave within a graveyard. The grave that emitted the light was excavated, and a body wearing an armor was discovered. The body was wearing a ring saying al-‘Izzatu Lillāh, Ahmad bin Mūsā, meaning “The Pride belongs to God, Ahmad son of Musa”. Thus it became known that this was the burial site of the sons of Mūsā al-Kādhim. Read more…

More than any other ancient site in Iran, Persepolis embodies all the glory — and the demise — of the Persian Empire. It was here that the Achaemenid kings received their subjects, celebrated the new year and ran their empire before Alexander the Great burnt the whole thing to the ground as he conquered the world.

Transport to Persepolis and nearby sites is a problem. There is a scheduled bus service between Shiraz and Marv-Dasht but not to and from Persepolis itself, so the easiest solution is to hire (and retain for the return trip) a taxi, if not from Shiraz (50km southwest) then from Marv-Dasht about 15km away If possible, two visits should be made to the site: in early morning to explore when the light is much ‘whiter’, and about 90 minutes before sunset, when the stone takes on a softer, golden colour.

Most of the stone now has a rough grey appearance, a result of wind-blown dust over the millennia, so do make a point of visiting the National Museum in Tehran to see the ‘waxed’ reliefs and column ensemble from Persepolis. This rich, dark brown stone set alongside a creamy limestone was the original colouring.

If you are limited to one visit, it will take three hours or so to walk around and take photographs, especially if you plan to walk up to the Achaemenid royal tombs behind for a magnificent view over the site. Take a telephoto lens or binoculars for viewing these tombs; these will also be useful if you’re going to Naqsh-i Rustam (usually included on the same day).

Bazaar-e Vakil: The main bazaar area is within walking distance of the Arg. As the name suggests, its construction formed part of the extensive building programme undertaken by Karim Khan, so-called vakil (regent) to the last Safavids. Rents from the bazaar and its hamam endowed the Masjid-e Vakil, constructed around 1773, and for many years out- of-bounds to foreign tourists.

It retains a sense of intimacy despite its large size and is organised on the two-ivan plan. Forty-eight stumpy stone columns, each carved in a barley-sugar spiral, mark the sanctuary area. The original mihrab of 1634, which suggested that an earlier mosque had been demolished, is no longer in place, but the 18th-century, 14-stepped minbar cut from one huge block of marble, is.

Some idea of the tile decoration inside can be imagined from the exterior panels. Purists may raise eyebrows at the flamboyant flower motifs and the colourful pastel palette but our spirits soar at such cheerful ornateness. Not all the tiles are original, as some restoration was carried out in 1828 and later years. Next door towards the main road is the bathhouse, converted in 2001 into a tea house and restaurant but now closed by the authorities. It has recently reopened as the private traditional Art & Handicraft Museum  so at least the charming interior can still be seen.

Backtracking past the mosque takes you into the carpet section of the bazaar. The Bazaar-e Vakil maintains much of its late 18th-century character with a northeast to southwest orientation (the direction of Mecca) laid out about a century earlier. Originally, it was one long avenue with four large caravanserais to accommodate merchants, but in the 20th century a main road was constructed across the avenue and two of the four caravanserais were demolished in a widening scheme. 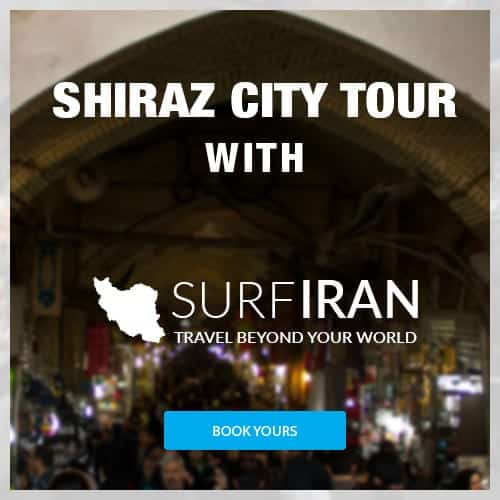