The Art And Crafts In Iran

A Short Look At The Long Take

A Short Look At The Long Take: The Art And Crafts In Iran

Iranian Culture” is one of the richest and most diverse cultural heritage collections. Capet weaving, Persian Miniature, Pottery, Architecture, Music, Calligraphy, Khatam-kari, Vitreous Enamel, and Wood Mosaic are just some examples of Iranian art and handicrafts.

Persian carpets and rugs of various types were woven in parallel by nomadic tribes, in village and town workshops, and by royal court manufactories alike. As such, they represent different, simultaneous lines of tradition, and reflect the history of Iran and its various peoples.

Iran is the place where carpet weaving was born. The discovery of Pazyryk – the oldest carpet – in the Siberia Mountains and its similarity with Persepolis made the researchers come up with the fact that this is an ancient art in Iran.

Carpets woven in towns and regional centers like Tabriz, Kerman, Mashhad, Kashan, Isfahan, Nain and Qom are characterized by their specific weaving techniques and use of high-quality materials, colours and patterns. Town manufactories like those of Tabriz have played an important historical role in reviving the tradition of carpet weaving after periods of decline.

Rugs woven by the villages and various tribes of Iran are distinguished by their fine wool, bright and elaborate colours, and specific, traditional patterns. Nomadic and small village weavers often produce rugs with bolder and sometimes more coarse designs, which are considered as the most authentic and traditional rugs of Persia, as opposed to the artistic, pre-planned designs of the larger workplaces. Gabbeh rugs are the best-known type of carpet from this line of tradition.

Scene from the Demotte or “Great Mongol Shahnameh”

Persian pottery or Iranian pottery refers to the pottery works made by the artists of Persia (Iran) and its history goes back to early Neolithic Age (7th millennium BCE).

It is the craft of making ceramic material into pots or pottery wares using mud. Clay is the most desirable soil used in this industry. Today, potteries are being made in most of the cities of Iran such as Gonabad, Lalejin in Hamedan, Meibod in Yazd, Shah Reza in Isfahan, Zanvar in Aerbaijan, Kalporgan in Sistan Balouchestan, Jouibar in Mazandaran and Siahkal in Gilan.

A hotel in Yazd

Iran’s architecture goes back to the seventh millennium before Christ. This art is developed for different reasons especially religious reasons. Iranian culture is especially valuable in comparison with the architecture of the other countries in the world; features such as suitable drawing, precise mathematic calculations, respecting technological and scientific issues in the building, high terraces, elevated  pillars and finally various designs that each introduce the glory of the Iranian architecture.

The tar appeared in its present form in the middle of the eighteenth century in Persia. The body is a double-bowl shape carved from mulberry wood, with a thin membrane of stretched lamb-skin covering the top.

Iranian music has been disseminated among the Iranian people since a thousand years before Christ and the most agreeable, easiest and understandable ones are available today. A big part of the Central Asia, Afghanistan, Pakistan, the Republic of Azerbaijan, Armenia, Turkey and Greece are influenced by this music. Barbod and Nakisa are the musicians in Ancient Iran.

Persian calligraphy is the calligraphy of the Persian language. It is one of the most revered arts throughout history of Iran.

Khātam is an ancient Persian technique of inlaying.

Khatam is a systematic polygonal with various numbers of frontages that is made of various ingredients in different colors. Five, six, seven, eight, or ten-gonals. Different types of wood, bones, some of the metals as well as shell are the main materials used in Khatamkari. We do not know where exactly this art stems from and there are many myths about its history. 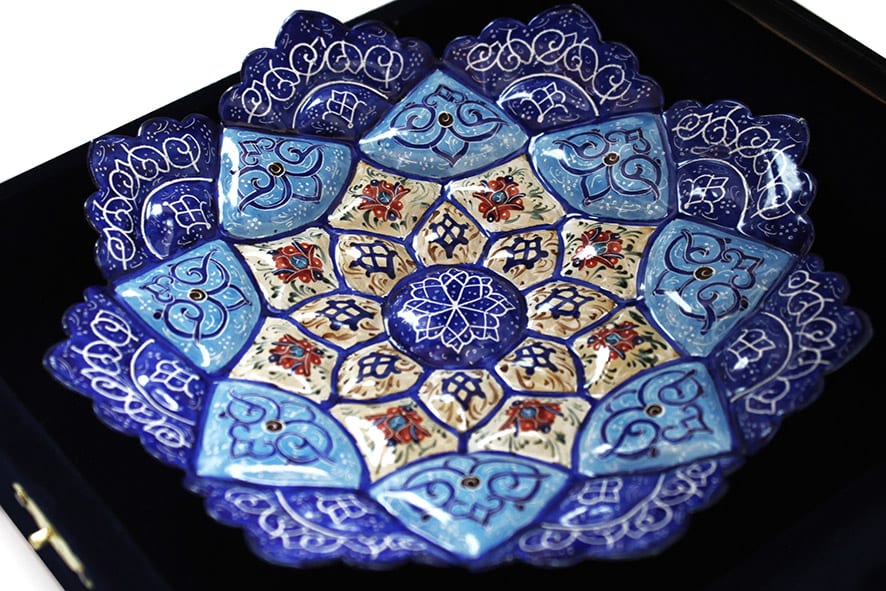 The art of Minakari or Enamelling is called miniature of fire as well as the decoration of metal and tile with mina glaze. Minakari or Enamelling is the art of painting, colouring and ornamenting the surface of metals by fusing over it brilliant colours that are decorated in an intricate design. Mina is the feminine form of Minoo in Persian, meaning heaven. Mina refers to the Azure colour of heaven.