Yazd is a city of magnificent mosques, Zoroastrian culture, carpet shops and ancient Persian wind towers, which ventilate houses through turrets oriented toward the prevailing valley winds and traditional guesthouse middle of deserts. Stay in one of the traditional buildings in the city of Yazd can be a memorable experience during your travel to Iran. Here are five unique hotels in the Yazd that shine like a pearl in middle of the desert in Iran.

Amazing Hotel Dad is 4-star hotel in Yazd. It is ideally located for guests wanting to visit local attractions.  As mentioned on their website, Dad hotel dates back to nearly a century ago as the legacy of an ambitious man, Haj Abdolkhalegh Dad who created this site in 1928. The site used to be an inn and transportation establishment for nearly 80 years and was fully renovated in 2007 with the effort of his son, Haj Mohammad Hassan Dad and his children and grandchildren to become an international 4 star hotel.

Situated in the heart of the second ancient city in the world with more than 3000 years history, Dad hotel enjoys a privileged position to main tourist attractions. 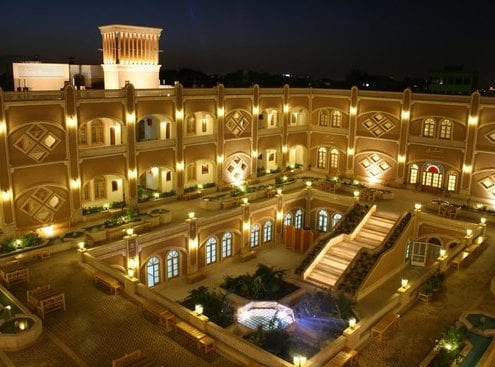 Parsian Safaiyeh Hotel located in heart of the Yazd city. For those who intend to visit Yazd, the nice city of wind towers and look for a kind of hotel that both sustains Iranian cultural and traditional beauties and provide the best services to its passengers by using modern suitable equipment and facilities, the five-star Parsian Safaiyeh hotel can be the perfect choice. Located in the most pleasant climatic and verdant region of Safaiyeh, the hotel has easy access to the city center and tourist attractions such as Jame Mosque and Amir Chakhmagh Complex. By staying in the beautifully decorated rooms and suites of the hotel, spending time in the lobby and tasting a variety of Iranian and foreign foods and drinks in the various elegant restaurants and cafe, one can have memorable moments. 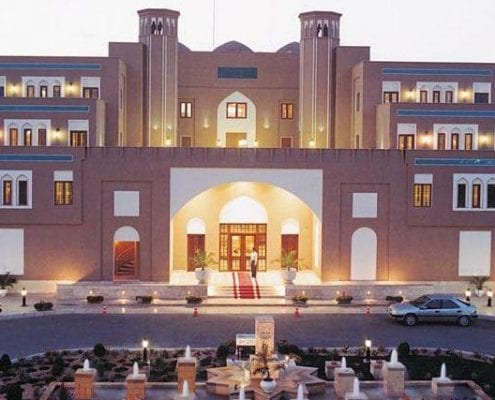 Infact Moshir al-Mamalek Garden Hotel was a roadside inn where travelers (Caravaners) could rest and recover from the day’s journey and converted to a caravanserai-style hotel, built around a lovely garden with water-courses, shrubs, and trees, and is 2-storey, with rooms in small groupings.

This place loaded with peaceful atmosphere and convenience. Lobby, lounge, and indoor dining areas are all beautifully decorated in local style, and feel intimate despite the dining areas being of fairly large size; and there is also outdoor dining in the garden area. The buffet breakfast is extensive and very good indeed. if you go to Yazd and do not staying in moshir-al-mamalek you miss a great chance and it a great missing. 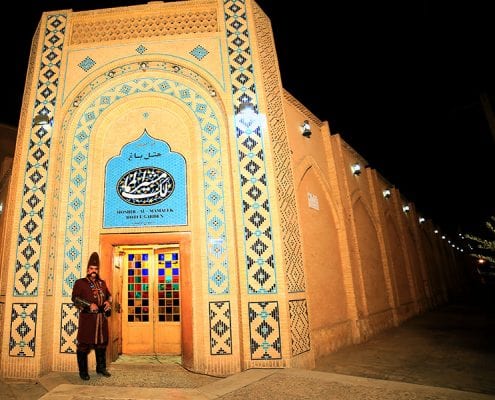 Fahadan hotel is situated in an old mansion known as “Tehrani’ha house”, which belongs to Qajar era.The Tehrani family, carpet traders, lived in this house some 250 years ago.

The beauty and the magnificence of the building caused it to be used as the economic consul office of some European countries such as France and Germany in the past. Recently the building has been nominated on the list of the national legacies.

This mansion includes three courtyards including the main yard,orangery and the pavilion,three attractive wind catchers,a lofty traditional hall,well chamber,basement,vestibule and a roof overlooking the historical quarter. 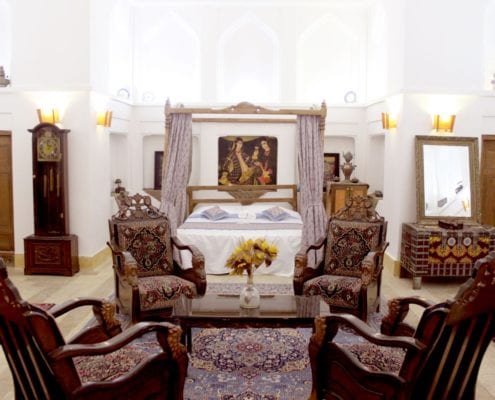 Hotel Zanbaq (Zanbagh) Yazd is a four star hotel located on the Jomhouri boulevard. According to reviews by a guest the rooms are quite large and functional with comfortable beds. The unusable shower head was changed swiftly upon my complaint.

The breakfast was better than average with many options and excellent bread. Quiet location off a main highway, but a 20 minutes car drive away from the historical center.

All in all, the Zanbaq hotel is an OK option for one or two nights if all the nicer hotels in Yazd are fully booked. 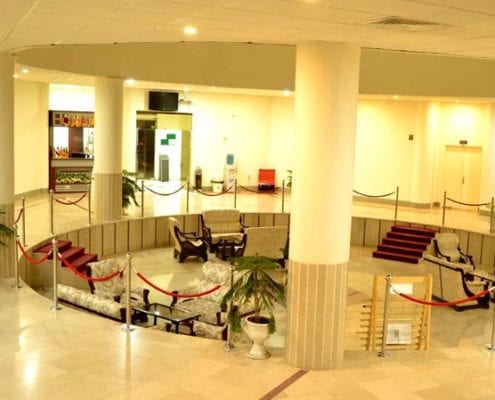 Video: Rick Steves After Travelling to Iran: “Why Death To America?!&...

IRAN: The Land of Glory and Beauties
Scroll to top