You are here: Home1 / Destinations2 / Carpet Museum of Iran 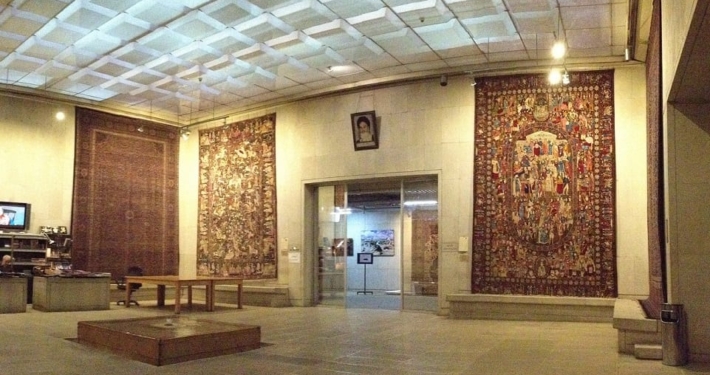 The Carpet Museum of Iran itself was designed by Queen Farah Diba and mixes classic ‘70s style with carpet-inspired function – the exterior is meant to resemble threads on a loom, which cool down the main building by casting shadows on its walls.

The ground floor of Carpet Museum of Iran display is arranged more or less in chronological sequence, working in an anticlockwise direction, beginning with a replica of the Pazyryck rug (c5th century BCE, the oldest known knotted carpet found in Siberia in the 1940s, now held in The State Hermitage Museum, St Petersburg, Russia).

It includes superb examples of 16th-17th-century Safavid rugs including the so-called Polonaises which caused a sensation at the 1867 Paris Universal Exposition. But you may prefer decoding the 18th-century ‘garden’ carpets with their stylized irrigation channels (including fish) and chenar plane trees (see page 159).

The impact of European art and taste on 19th-century Persian carpet design grows more marked as you walk around, whether it is the reproduction of a Watteau oil painting or a large `family-tree’ of American presidents with a 1904-05 date presumably made for the 1904 Louisiana Purchase Exposition, St Louis.

The upstairs gallery of the Iran carpet museum serves as a temporary exhibition space, but generally includes more ‘tribal’ work. It is worthwhile investigating the small shop in the main entrance hall as a number of the Farsi publications have English summaries, but the postcards on sale surprisingly do not illustrate any of the museum pieces. A small cafeteria is opposite but be warned: the attendant professes never to have change and you should check his prices against the display notice.

Carpet Museum of Iran is a repository for hundreds of breathtaking Iranian carpets from Tabriz, Kashan, Isfahan, Kerman. 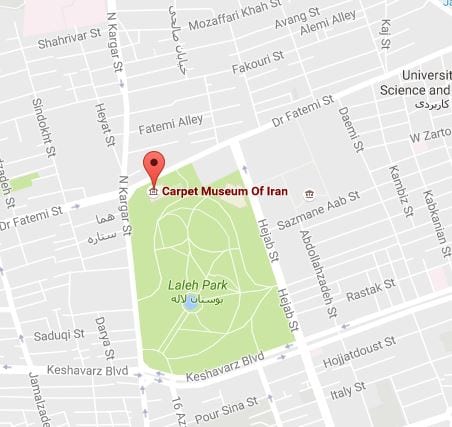