You are here: Home1 / Destination2 / Tehran3 / The National Museum of Iran 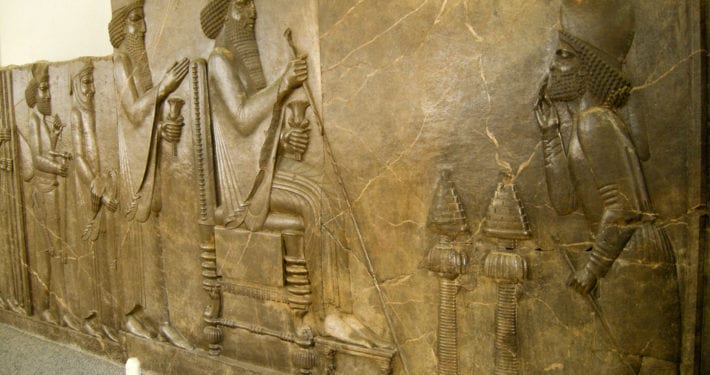 The National Museum of Iran consists of the Iran Bastan Museum (Ancient Iran) and the Museum of Islamic Archaeology and Art of Iran, as well as eight research departments, the conservation department, the library and the archives.

The research departments are organized by specific archaeological and historical periods and topics. This Museum houses the largest collections of archaeological objects in the country.

Dating from the Paleolithic to the late Islamic period, the collections represent more than a million years of human settlement and cultural achievement in Iran.

The Paleolithic personal ornaments, clay and human figurines from the early village communities, earliest evidence of administrative technology and writing from the 4th millennium BC, Persepolis stone reliefs and capitals, Parthian life-size bronze statue of the “Shami Man”, natural mummy of a man called “Salt Man,” the Ilkhanid Mihrab (prayer niche) of Dar-e Behesht, and the pen and ink (Siah Qalam) paintings by Reza Abbasi of the Safavid period are among the important objects in the museum.

Why visiting the Museum of Ancient Iran?

The Ancient Iran Museum is the ﬁrst building in Iran speciﬁcally designed and built as a museum.

It was designed by the French architect André Godard and constructed by two Iranian masons, Abbas-Ali Me’mar and Morad Tabrizi between 1933 -1936.

Its façade and portico were inspired by the famous arch of Taq-e Kasra of Ctesiphon, one of the famous examples of the architecture of the Sassanian period; the building’s brickwork exhibits the Persian tradition of brick construction.

The permanent exhibition covers a surface area of some 4,800 square meters on two ﬂoors and a basement, containing selected artifacts in chronological order, from the Lower Paleolithic period (ca. 1,000,000 years ago) to the end of Sasanian times (651 CE).

Why visiting the Museum of Islamic Archaeology and Art of Iran?

The Museum of Islamic Archaeology and Art of Iran covers some 4000 square meters with three ﬂoors is a part of the National Museum of Iran.

Its octagonal plan is inspired by the Sasanid palace at Bishāpur. The museum building was designed by architect Eugene Aftandilian, and its construction began in the 1940s and completed in the1950s.

The building was initially used as an ethnographic museum and for temporary exhibitions. After a period of renovation, the building was reopened in 1996 as the Museum of the Islamic Era.

In the summer of 2006, another phase of restoration and reconstruction began, and the new museum was reopened in 2015.

The ground ﬂoor is designated as the auditorium and the temporary exhibition hall. The Islamic artifacts are on display chronologically on the ﬁrst and second ﬂoors.

The second ﬂoor contains the early Islamic, Seljuq and Ilkhanid periods and the ﬁrst ﬂoor houses the holy Qurān hall, and artifacts of the Timurid, Safavid, Afshār, Zand and Qajar periods.

The National Museum of Iran is the main archaeological museum of Iran (formerly Iran Bastan Museum) and the brainchild of André Godard, the French archaeologist and architect who was its first director.