The nature of the region as well as the biodiversity in this part of Iran contain diversity of flora and fauna, valuable genetic resources.

In 1972, this region was identified as a protected area under the control of the Department of the Environment of Iran and in 1976, Touran region received the title of biosphere reserve by UNESCO.

Khar Turan is home to one of the largest populations of the critically endangered Asiatic cheetah. There were about 12-15 of these charismatic cats in the National Park area.

Asiatic cheetah or Iranian cheetah, is a critically endangered cheetah subspecies surviving today only in Iran. It used to occur in India as well, where it is locally extinct. The Asiatic cheetah lives mainly in Iran’s vast central desert in fragmented pieces of remaining suitable habitat. Although once common, the cheetah was driven to extinction in other parts of Southwest Asia from Arabia to India including Afghanistan. As of 2013, only 20 cheetahs were identified in Iran but some areas remained to be surveyed.

Brilliant ground agama is a species of agamid lizard of the Agamidae. It body’s length reaches 17 cm.  Its habitat is in arid and semi-arid areas on sandy places close to agricultural lands. Distribution and Habitat of the agama is widely spread all over the west part of Iran, Afghanistan, Armenia, Turkey, Azerbaijan, west part of Georgia.

The Caracal is one of the small felid species and secretive animal in Iran. They are resident in desert areas but they are not observed in the very dry areas, on the contrary sand cat, is observed in these areas. Kazakhstan is northernmost limit of caracal range and India is eastern limit of its range Approximately caracal is one of the abundant cats in Iran because more often there are records from its observation in the protected areas. Caracal is known as LC species inthe Red list IUCN.

Echis is a genus of venomous vipers found in the dry regions of South and central regions of Iran. All members of this genus have a distinctive threat display, which involves forming a series of parallel, C-shaped coils and rubbing them together to produce a sizzling sound, rather like water on a hot plate. The venom of Echis species consists mostly of hemotoxin. The genus is recognized as medically significant in many tropical rural areas. They are widespread and live in areas lacking modern medical facilities. Most victims are bitten after dark when these snakes are active.

Iranian Euphrates Jerboa  is a rodent of the family Dipodidae and genus Allactaga. They are characteristically known as hopping rodents.

See-see partridge is a gamebird in the pheasant family Phasianidae of the order Galliformes, gallinaceous birds. This 22–25 cm bird is a resident breeder in dry, open and often hilly country. It nests in a scantily lined ground scrape laying 8-16 eggs. The see-see partridge takes a wide variety of seeds and some insect food. See-see partridge is a rotund bird, mainly sandy-brown with wavy white and brown flank stripes. The male has a grey head with a black stripe through the eye and a white cheek patch. The neck sides are speckled with white. The head pattern is the best distinction from sand partridge. When disturbed, see-see partridge prefers to run rather than fly, but if necessary it flies a short distance on rounded wings. The song is a whistledhwit-hwit-hwit.

Phalacrocoracidae is a family of some 40 species of aquatic birds commonly known as cormorants and shags. Cormorants and shags are medium-to-large birds, with body weight in the range of 0.35–5 kilograms (0.77–11.02 lb) and wing span of 45–100 centimetres (18–39 in). The majority of species have dark feathers. The bill is long, thin and hooked. Humans have used cormorants’ fishing skills in China, Japan, Greece and the Republic of Macedonia, where they have been trained by fishermen. both the Pygmy and the Socotra Cormorant occur in Iran.

The mouflons are subspecies group of the wild sheep living in the border areas of East and North Khorasan, and mountainous areas of Semnan and Mazandaran provinces, Iran.

The white Wagtail is a small bird. Breeds mainly in Europe, Asia and North Africa. Colour of upper part of the body is mostly grey, and the bottom is white. The white wagtail is an insectivorous bird of open country, often near habitation and water. It prefers bare areas for feeding, where it can see and pursue its prey. In urban areas it has adapted to foraging on paved areas such as car parks. It nests in crevices in stone walls and similar natural and man-made structures.

Schokari Sand Racer is a species of Colubrid snake found in parts of Asia and Africa. The Schokari is one of the fastest snakes in the Middle East, the Schokari sand racer has a thin body with variable colouration and patterning and an elongated head, featuring large golden-brown eyes with rounded pupils. Three main colour forms are recognised: a striped form, which has four dark, longitudinal stripes running over the upperparts; a non-striped form, which is either unmarked or lightly dotted; and a rear-striped from, with dark, longitudinal stripes only on the posterior part of the body, which merge towards the anterior.

Persian Zebra or Iranian Zebra, is one of the species of Asian Zebra (Equus hemionus) and a large mammal belonging to the horse family. It is indigenous to the deserts of Iran, Syria, India and Tibet. Persian Zebra is similar to a donkey but slightly larger in size. Persian Zebra is now critically endangered, and the remaining numbers can now be found in two areas of Iran, including in Touran National Park and other protected areas of Bahram’gur. Destruction of the natural habitats for these animals, lack of proper management of protected areas and hunting are only a few factors that have threatened the survival of these animals. The International Union for Conservation of Nature (IUCN) currently lists the animals in the Valley as “endangered”. There is currently no accurate official count of these zebras. The Environmental Protection Agency recently announced that the number is 330, while only last autumn 2012, there were over 433 of them still alive. It then looks like that in the last six months; over 110 of them have died. It seems that more attention and serious measures need to take place in order to preserve Persian Zebra.

READY FOR YOUR ADVENTURE TOUR? 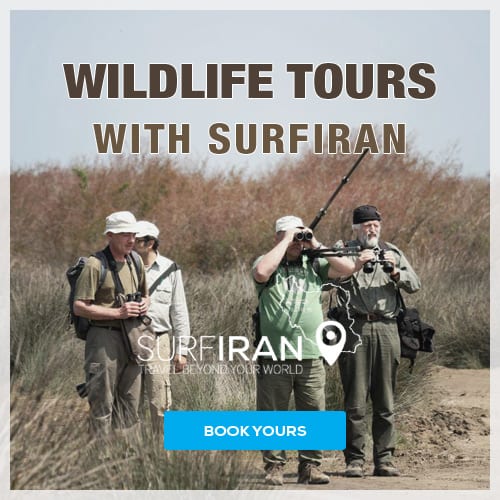