A Dwelling Place for the Ancient Gods

Ziggurat: A Dwelling Place for the Ancient Gods

Ziggurats were built by ancient Sumerians, Akkadians, Elamites, Eblaites and Babylonians for local religions, predominantly Mesopotamian religion and Elamite religion. Each ziggurat was part of a temple complex which included other buildings. The precursors of the ziggurat were raised platforms that date from the Ubaid period during the sixth millennium.

Ancient ziggurats were massive temple structures built in Ancient Mesopotamia to honor a deity. Ziggurats were built for hundreds of years in various regions of the ancient Middle East.

Ziggurats, what we know

Ziggurats were a form of ancient Mesopotamian mud-brick temple: were common to the Sumerians, Babylonians and Assyrians from approximately 2200 until 500 BCE. Some of these architectural marvels still stand today.

The word ziggurat is derived from the Babylonian ‘ziqqurratu’, meaning ‘mountain peak’ or ‘pinnacle’. The ancients considered mountains to be the link between the heavens and earth; for instance, Mount Olympus was home to the Greek pantheon.

Partially reconstructed facade and the access staircase of the ziggurat. The actual remains of the Neo-Babylonian structure can be seen at the top.

Sumerian temples were believed to have had astrological significance. They were thought to be a vertical bond between heaven and earth, the earth and the underworld, and a horizontal bond between the lands.

While their actual function still remains obscure, it has been suggested that ziggurats symbolized the primeval mound which the universe was thought to have been created upon, heavenly mountains, bridges between heaven and earth or celestial stairways between the gods and humans.

Mesopotamians considered mud to be the purest of substances; therefore, it was employed in the construction of these stepped structures which ascended toward heaven, bringing man closer to the gods and facilitating his worship.

Considered the temporal dwelling of a deity or the meeting place of gods and humans, ziggurats had a high temple, a low temple and no internal chambers. They were not used as places for performing public religious rites and rituals, but rather as the earthly house of god.

Built in receding tiers upon rectangular, oval, or square platforms, ziggurats were pyramidal structures with sun-baked brick cores and multicolored glazed-brick exteriors. The number of tiers ranged from two to seven, with a shrine or temple at the summit. 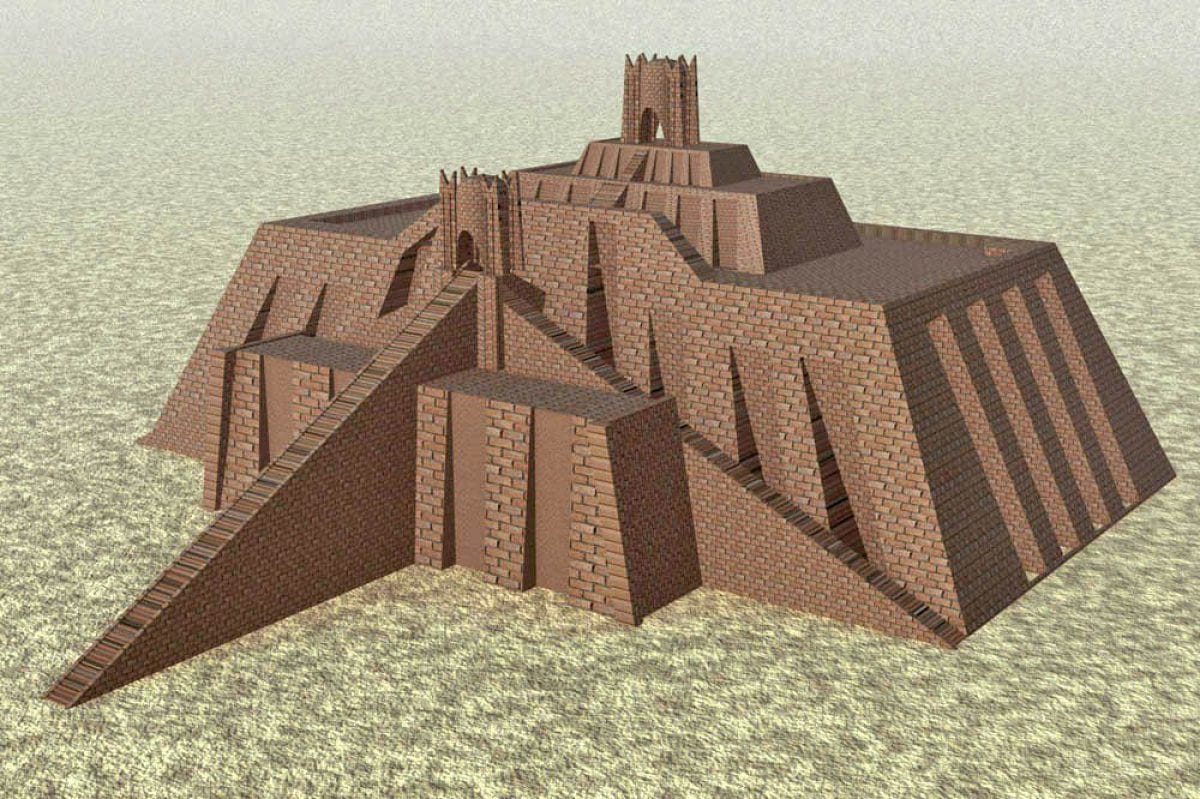 The seven levels of the ziggurat are said to have represented the number of heavens, planes of existence, planets and the seven metals and the colors associated with them.

Their resemblance to Egyptian pyramids and the pyramidal structures of Central America has been the cause for numerous academic debates; however, as ziggurats had no funerary purposes, nor were they used as sacrificial altars, any link between the three structures has been ruled out.

Each city had its own patron god, and that god was usually perceived to be the landowner of the temple and its surrounding area; the king was his bailiff; the king’s daughter was the high priestess of the shrine.

Priests were the only ones allowed inside the ziggurat temples. They were tasked with attending to the needs of the gods, giving them absolute power over society.

The temple at the base of the ziggurat was where the deity inhabiting it was fed and clothed daily. The ziggurat also had sacred workshops, granaries, storehouses, kitchens, and rooms for priests and slaves, who were employed in smelting, weaving, and preparing goods for sale.

Access to the shrine was either via exterior stairways, a series of ramps on one side of the ziggurat, or a spiral ramp from base to summit. No means of ascent, however, have been found in half of the 25 known ziggurats, four of which are located in Iran.

Sialk, in Kashan, Iran, houses the world’s oldest ziggurat which was built in 2,900 BCE and is one of the four Elamite religious structures in Mesopotamia. The other three are Susa ziggurat (1,800 BCE), Haft Teppeh (1,375 BCE) and Choqa Zanbil (1,250 BCE), all in Khuzestan Province.

The current name of Tchogha-Zanbil corresponds with the ancient city of Dur Untash, dominating the course of the Ab-e Diz, a tributary of the Karun. The city was founded as a religious capital during the Elamite period by Untash-Napirisha (1275-1240 BC) in a site half-way between Anshân and Suse. Roman Ghirshman carried out the complete exploration of the site from 1951 to 1962.

The site contains the best preserved and the largest of all the ziggurats of Mesopotamia. The first enclosure contains the temenos. In origin, the temple located at the centre was a square building, dedicated to the Sumerian god Inshushinak. This temple was then converted into a ziggurat of which it constitutes the first storey. The solid masses of the four other storeys are in the other starting from the ground of the court (and not one on top of the other as in Mesopotamia) so as to cover all the surface of the old central court

Access was by means of a vaulted staircase, invisible from outside, unlike the squatter Mesopotamian ziggurats, which were equipped with three external staircases, Today the ziggurat is no more than 25 m high, the last two stages, which originally rose to a height of 60 m, having been destroyed. The ziggurat is sacred not only to Inshushinak but also to Napirisha, the god of Anshân.

On the north-western side of the ziggurat a group of temples were dedicated to the minor divinities, Ishnikarab and Kiririsha. An oval wall surrounded the temples and the ziggurat.

The second enclosure, trapezoidal in form, delimits a vast, almost empty zone. In the third enclosure, only three palaces were built and a temple, near the Royal Gate, with a large interior court. This third enclosure was to protect the town of Dur Untash, the houses of which were never built. The Untash-Gal Palace (13th century BC) was discovered, separated from the temenos.

In spite of the destruction attributed to the Assyrians, a whole series of heads, statuettes, animals and amulets were found, and the remains of two panels in ivory mosaic. Several vaulted tombs were discovered in the basement of the royal residence, with evidence of cremation. Nearby was a temple dedicated to Nusku, the god of fire.

To supply the population of the city with water, Untash-Napirisha made a channel of about 50 km long, leading to a reservoir outside the northern rampart; from there, nine conduits carried the filtered water to a basin arranged inside the rampart.

Dur Untash was given up by the Elamite kings in the 12th century BC in favour of Susa. They transported all the treasures of Tchogha Zanbil to Susa where they were used to decorate the recently restored temples. In 640 BC, Dur Untash was entirely destroyed by the Assyrian king Assurbanipal, a few years after his conquest of Susa.