The Most Scenic Train Routes in Iran

The Most Scenic Train Routes in Trans-Iranian Railway

The Trans-Iranian railway is a long route connecting the Caspian Sea in the north to the Persian Gulf and Oman Sea in the south (Bandar-e Torkaman in the northeast to Bandar-e Imam Khomeini in the southwest of Iran). The nominated area is 5784 ha, with a length of more than 1394 km and a width of 1435 mm, includes all related Infrastructures such as bridges, tunnels, train stations and access roads. The cross country railroad of Iran is the major industrial and construction masterpiece of early 20th century. In this article let’s take a look at some of the most scenic train routes in Iran. 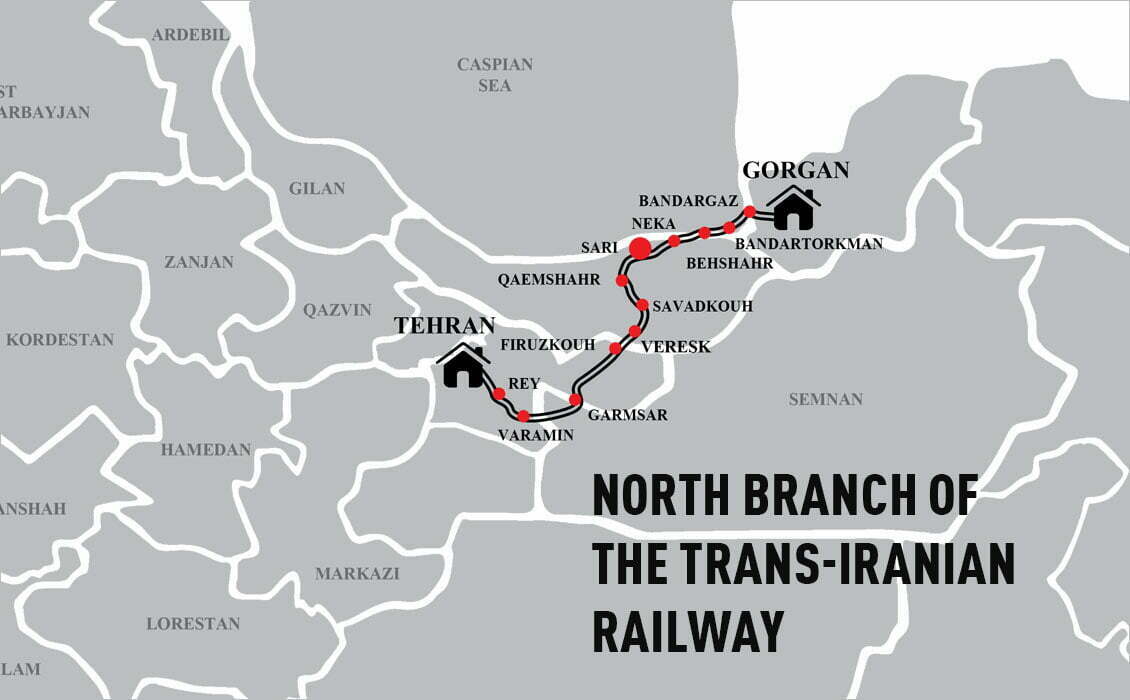 North branch of the Trans-Iranian Railway

The Trans-Iranian Railway on its north leg, crosses different regions in a 10-hour journey between Tehran and Gorgan. This scenic line experiences less traffic since it is not one of the major transportation lines. But the fun fact is that most of its station structures and junction equipment are still original gear from over 80 years ago. The most remarkable vistas of the north branch are as followed: 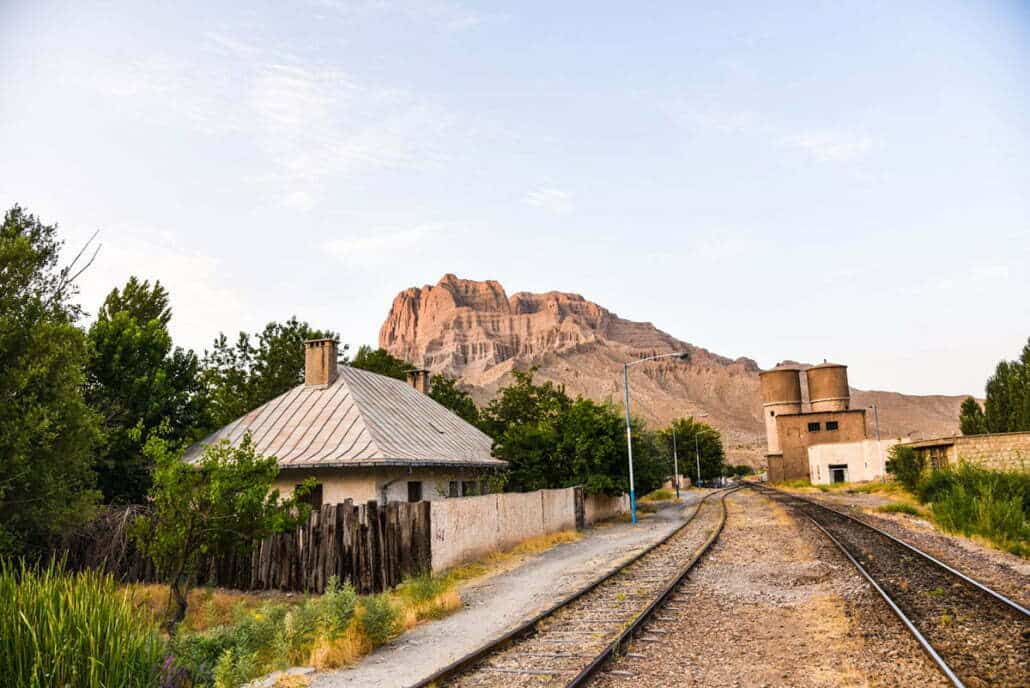 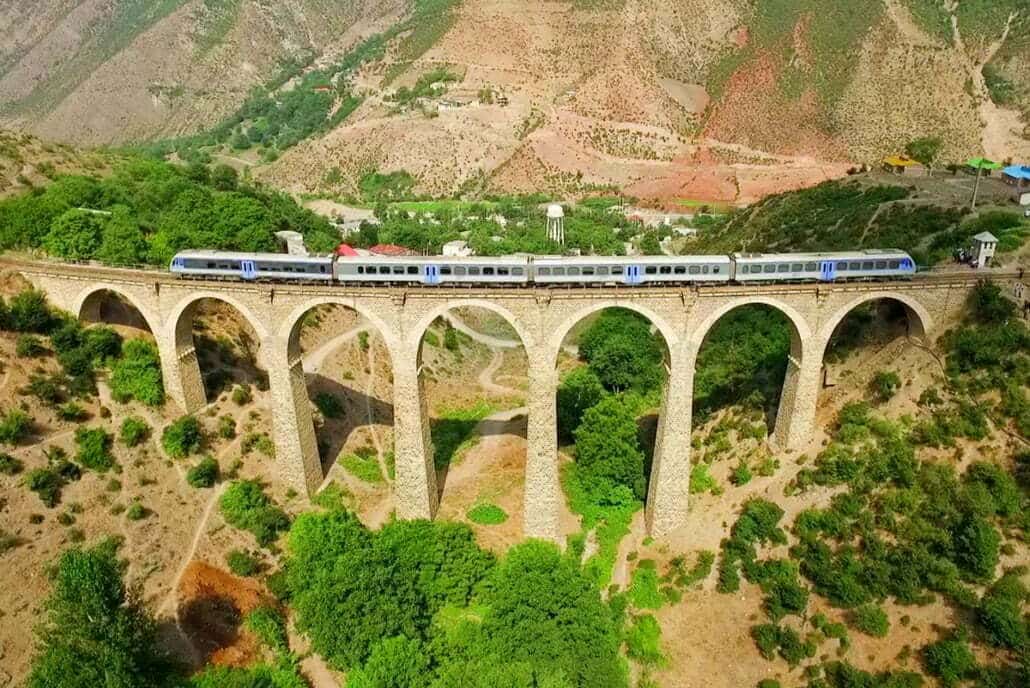 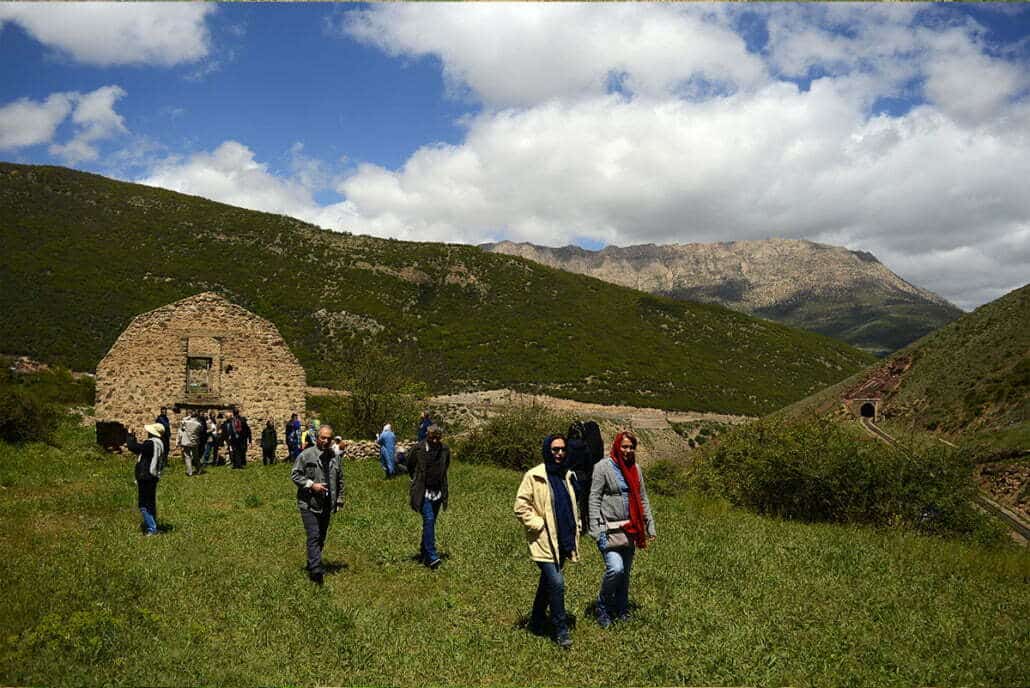 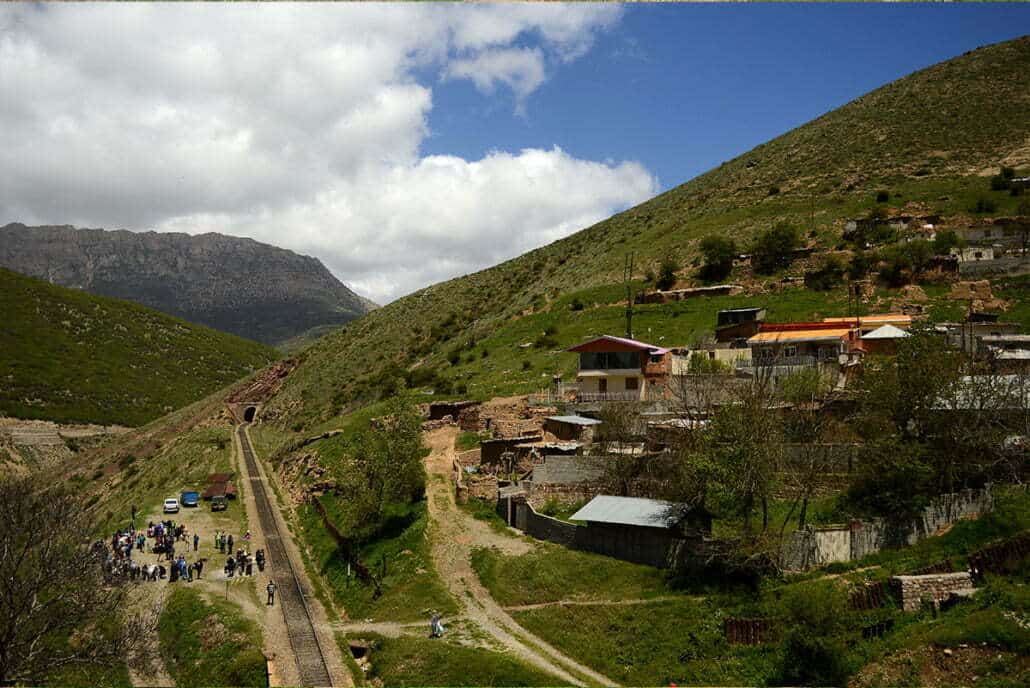 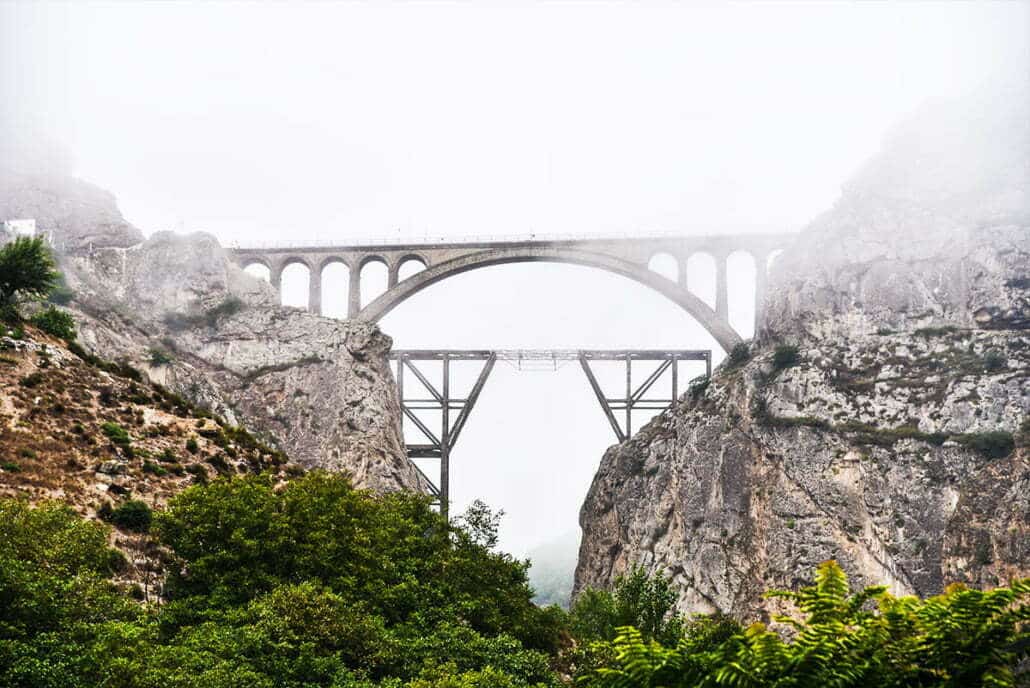 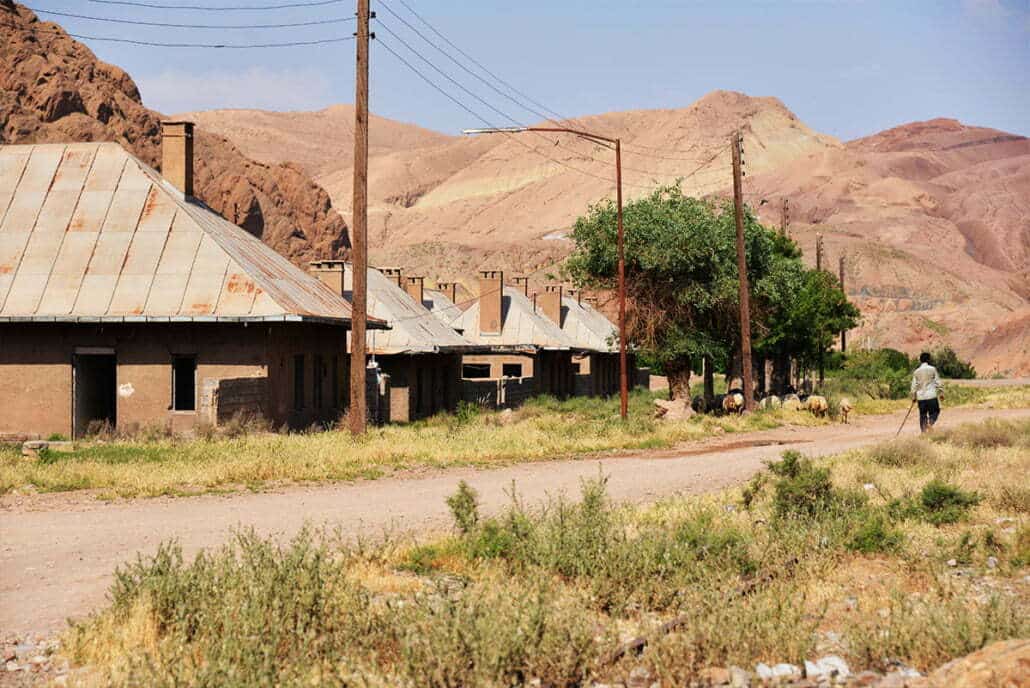 This section begins from the deserts of Semnan province, passing through the harsh nature of giant rocks which resulted in numerous salt, limestone and chalk mines in the Garmsar region. The spooky hoodoos and empty holes in the sedimentary rocks create dreadful sounds by the wind, making them famous as “Doodkesh-e Jenn” (genie’s chimney)! Passing these strange rock formations, the train enters two fertile regions of Zarrin Dasht (golden plain) and Simin Dasht (Silver plain), where orchards of walnut, plum, pomegranate, apricot and apple trees line up on the sides of the track with a background of rocky hills.

After Firouzkuh station, the train goes into a long tunnel (almost 3 km) to enter a completely different topographic region. We are in the magnificent Alborz mountains. Gadook station is the highest point of this route, over 2100 meters above sea level. Especially in the Fall and winter this area is cuddled in a dense fog, while in spring the rain brings on the rich color of the rocks.

Se Khat-e Tala (3 golden lines) which refers to three lines of railroad on the side of a sheer mountain excites the passengers. This section was the most challenging part of the north branch of Trans Iranian Railroad, and of course the most expensive to build. A train passes this section three times, ascending or descending the steep slope, while making a turn in the tunnels. To be honest, it is best experienced on the Firouzkuh road; people love to see a train going back and forth on this mountain.

But the most famous railway structure in Iran is the Veresk Bridge. This beautiful arch bridge has an altitude of 110 meters with 66 meters width. It was called the Victory Bridge during WWII and carries many stories and myths that Iranians just love to talk about! Trains pass over this bridge fairly quickly, but a remarkable view of the bridge is upon passengers when the train enters the Veresk station. No matter what, Iranians always come to the windows to see the bridge and feel proud about it.

Continuing this journey, the train leaves the mountainous area and enters Shirgah, the densest Hyrcanian forest in Iran. Either Spring or Fall is the best time to enjoy the delight of this area. After Shirgah station, the train enters the Mazandaran Plain with numerous cities, villages and farms.

A one day train tour on a private train is performed by RailRo train touring company. They stop at important spots and passengers get off and explore historic stations along the way. For more information please check Day trip – Iran’s Northern Railway 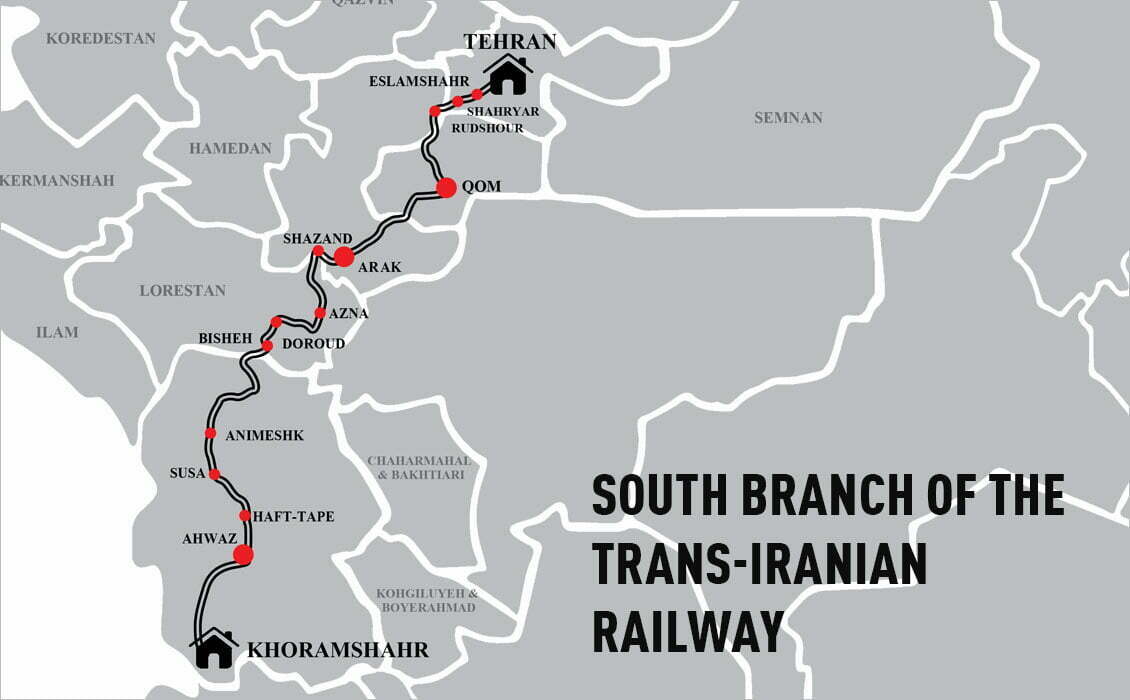 South branch of the Trans-Iranian Railway

We spoke about the charms of the north branch, but here comes the enchanting rival of the North! The South Branch leaves Tehran, passes semi-desert areas of central Iran, crosses through 12 large canyons of the majestic Zagros mountains and enters the fertile Khuzestan Plain in the south west. The trip from Tehran to Ahvaz takes about 15 hours on average, but most of the passenger trains on this route are nocturnal. In order to enjoy the scenic route, some people skip the overnight trip from either end and use one of the twice daily local trains between Doroud and Andimeshk, a trip that takes the adventure of traveling in Iran to a whole new level! 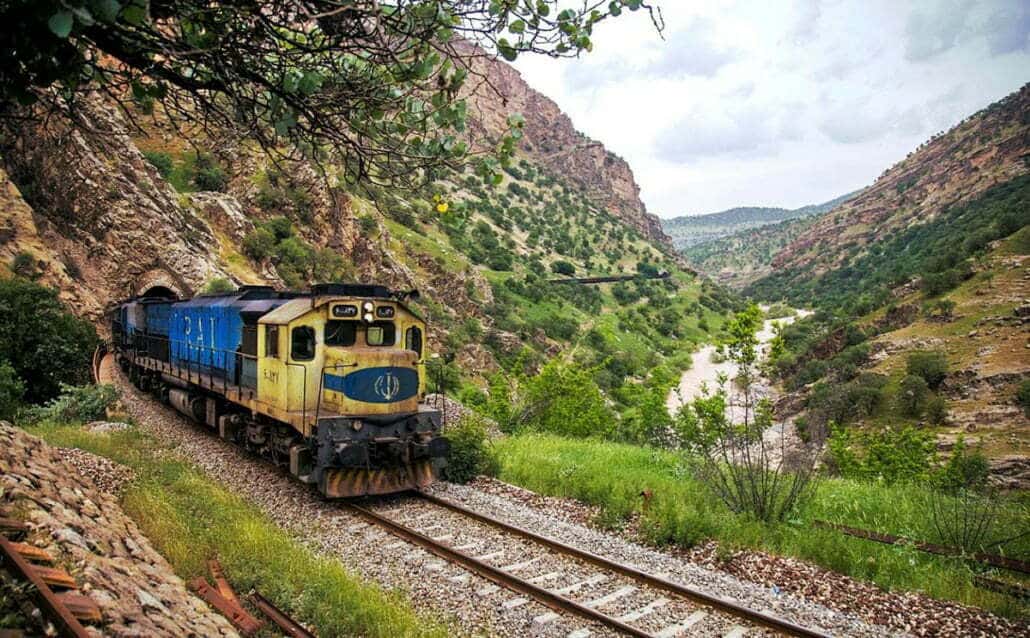 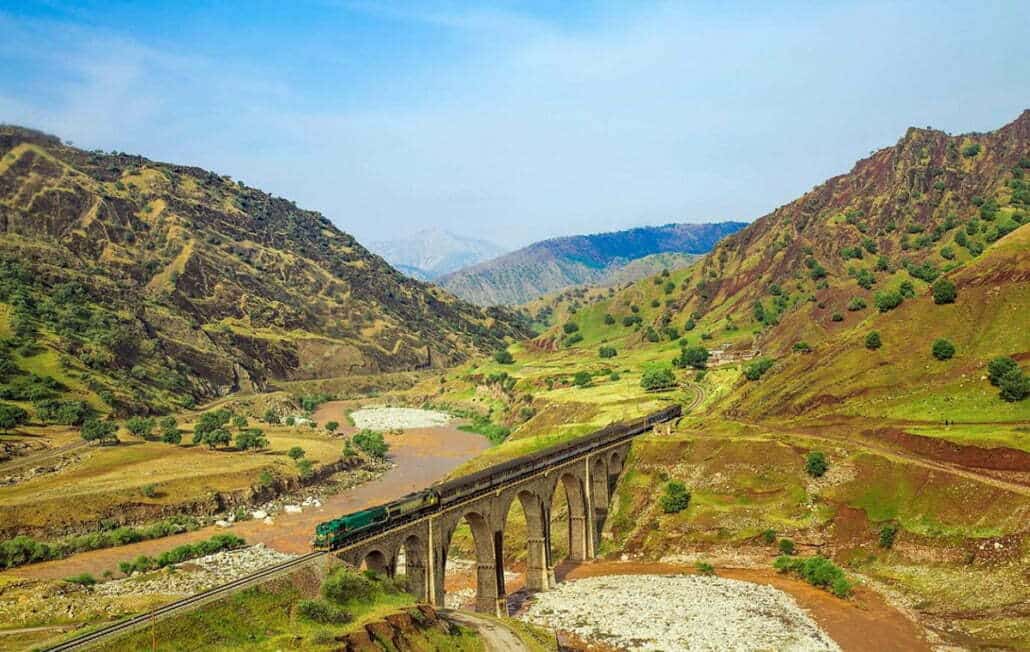 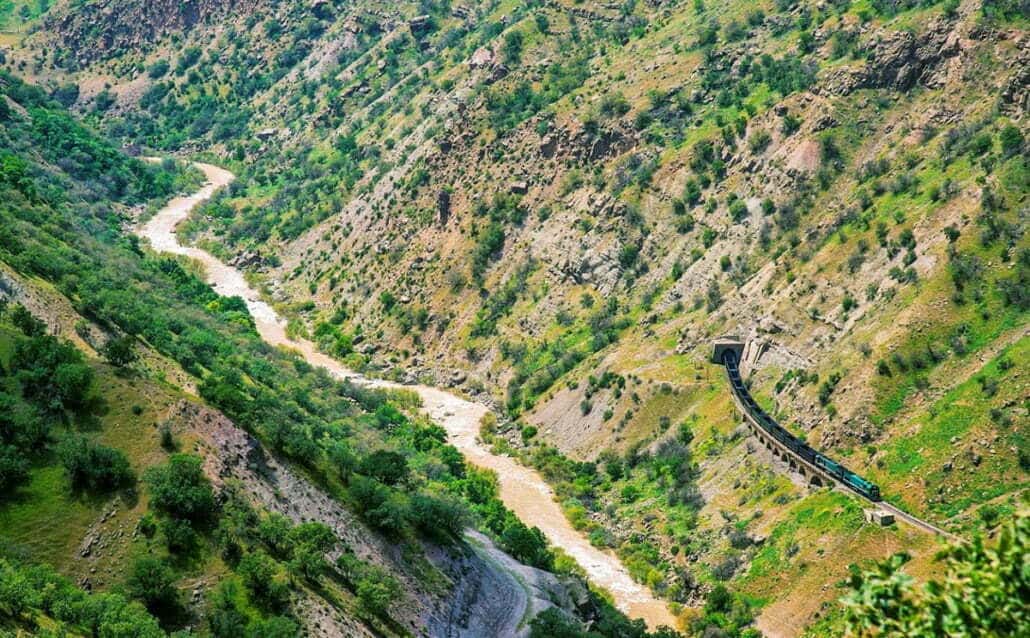 Do-roud (literally meaning two rivers) is the beginning of the Zagros mountain ranges on this route. Before reaching Doroud, the train was crossing on hillsides of Oshtoran Kuh, where headwaters of river Sezar emerge. From Doroud the dazzling dance of the railroad and the river Sezar begins. The train is moving forward and for several times it crosses bridges to switch sides with the river, while the river Sezar welcomes small streams to grow bigger on each turn.

From Qaroun, the famous oak tree forest begins, and this journey of stunning natural beauty reaches the most renowned train station in Iran: Bisheh Station. This station is located right above one of the most remarkable waterfalls of Iran, Abshar Bisheh. Unfortunately the waterfall is not visible from inside the train. Many passengers get off here to spend a half day, going for a light hike to see the waterfall. They would get on the next train that comes about eight hours later.

After Bisheh Station on the way to Sepid Dash (White Plain) the dense oak forest continues. From here the railroad needs to descend to lower altitudes and does it by multiple turns on the mountain. From Keshvar station to Tang-e Haft (7th Canyon) the trains go through numerous tunnels, making it exciting to capture the scenes in the short glimpse before the next tunnel.

Proceeding towards Tang-e Panj (5th Canyon) one of the most challenging constructions of the Trans Iranian Railroad begins. Shortly after Tang-e Panj, high waters of Sezar and Bakhtiyari rivers join to form the wild and roaring Dez river. The rough mountains are extraordinary and the highest bridges and longest tunnels of the Trans Iranian Railroad are built here. After this long trip through the mountainous region, the train reaches Shahbazan station and enters the green Khuzestan Plains. 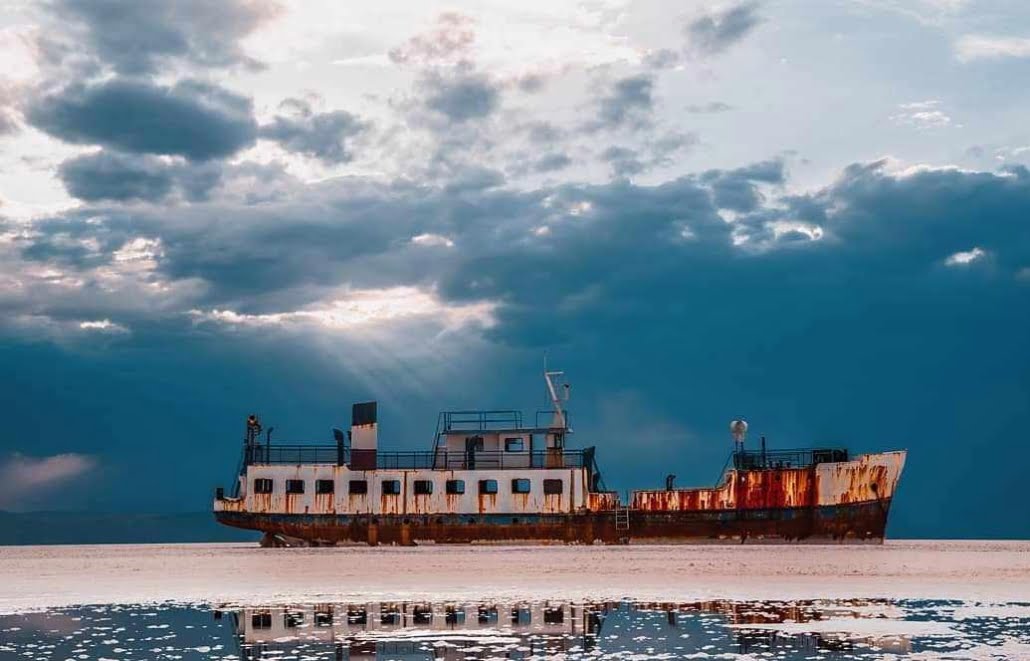 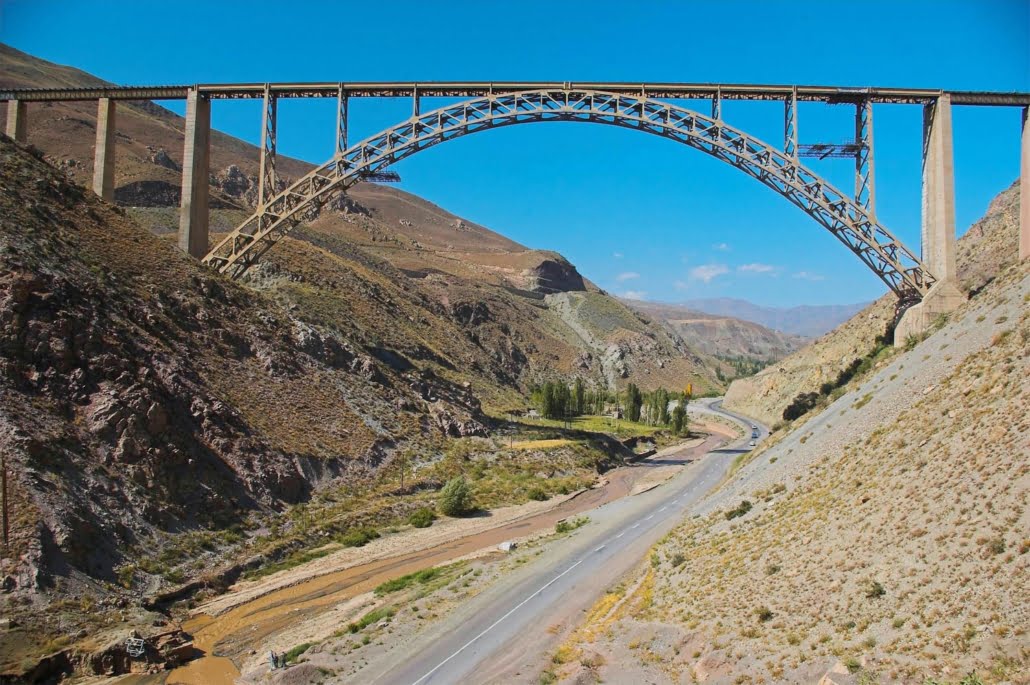 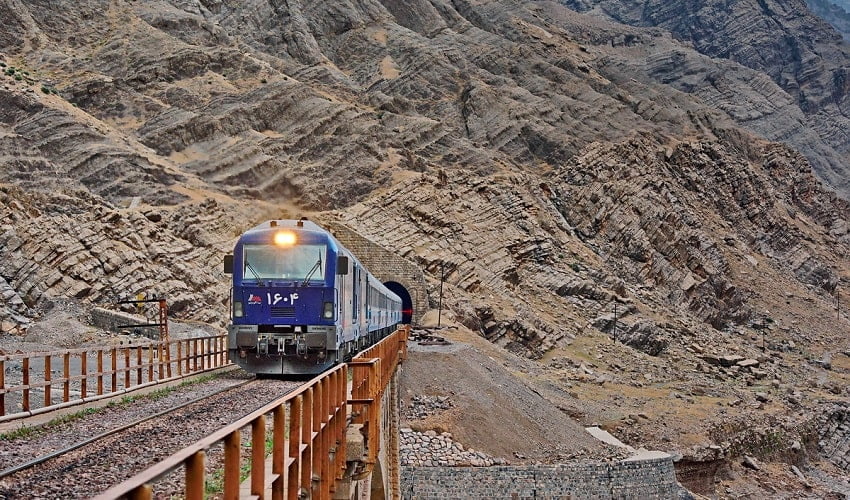 Razi station is the main border point between Iran and Turkey, most land travelers cross this point to enter or exit the country. Leaving Tabriz, the train enters the high plain towards Lake Urmia. Passenger trains on this route go overnight, missing the beauty of the travel. Here is a description of the route, and we hope that a new daytime schedule is added in the near future.

The largest arch bridge in Iran, called Ghotour bridge, is located on this line crossing over Ghotour river. This bridge has survived six bombardments during the Iran-Iraq war, yet it was somewhat damaged so the trains had to pass over it with their engines turned off. By building another detour bridge, engineers got a chance to strengthen the Ghotour bridge, to serve the Iran-Turkey transit way again. Also this bridge was originally painted in red, but during the time of war the color was changed to beige to help it camouflage. 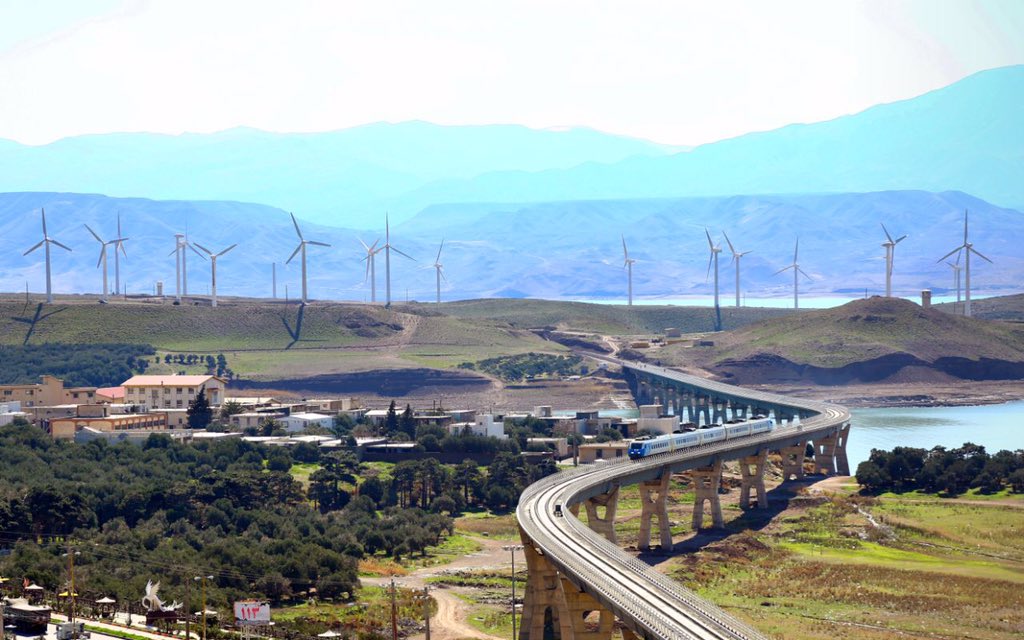 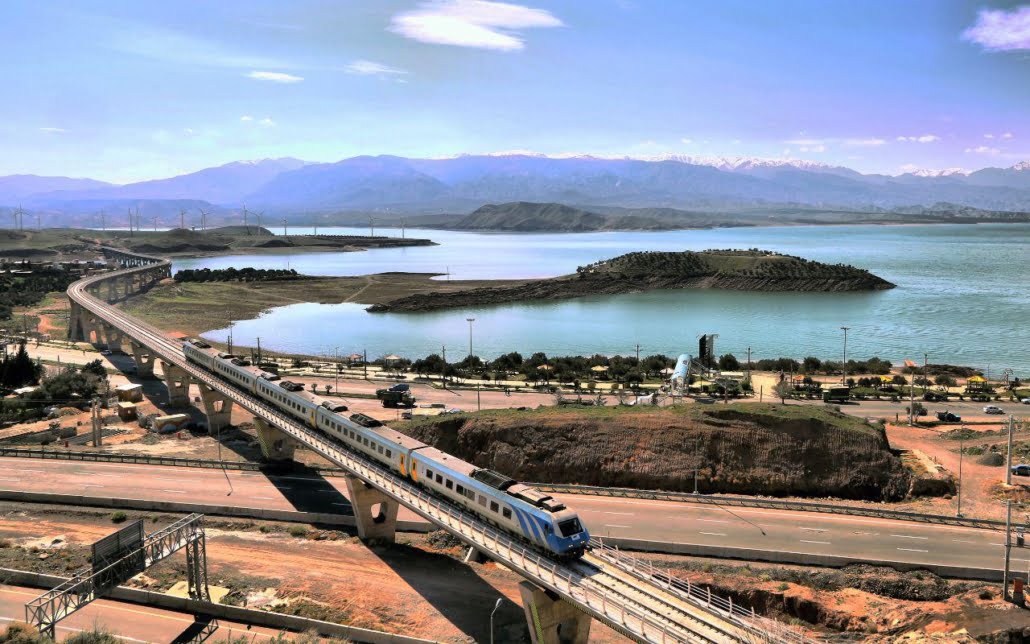 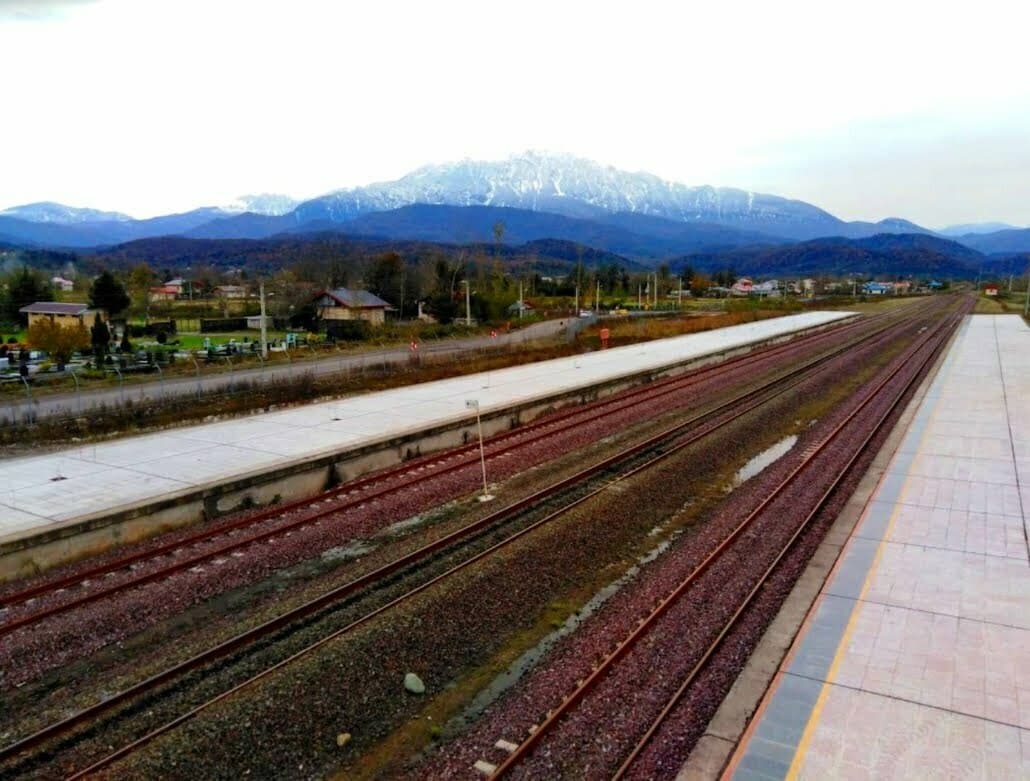 This journey from the beautiful city of Qazvin towards the green province of Guilan is delightful and memorable. High plateaus where Kuhin station is located create stunning snowy scenes in the winter and velvet green fields in the spring. The railroad reached the Sefidrud dam and its reservoir where numerous windmills erected from the ground to tame the savage winds of Manjil!

The rail tracks cross over Sefidrud river six times, creating a beautiful perspective on its way to Guilan forests mixed with rice fields until reaching the beautiful city of Rasht. Rasht has a special vibe to it, it’s a hospitable and tranquil city, especially during cooler times of the year like in Spring and Fall. 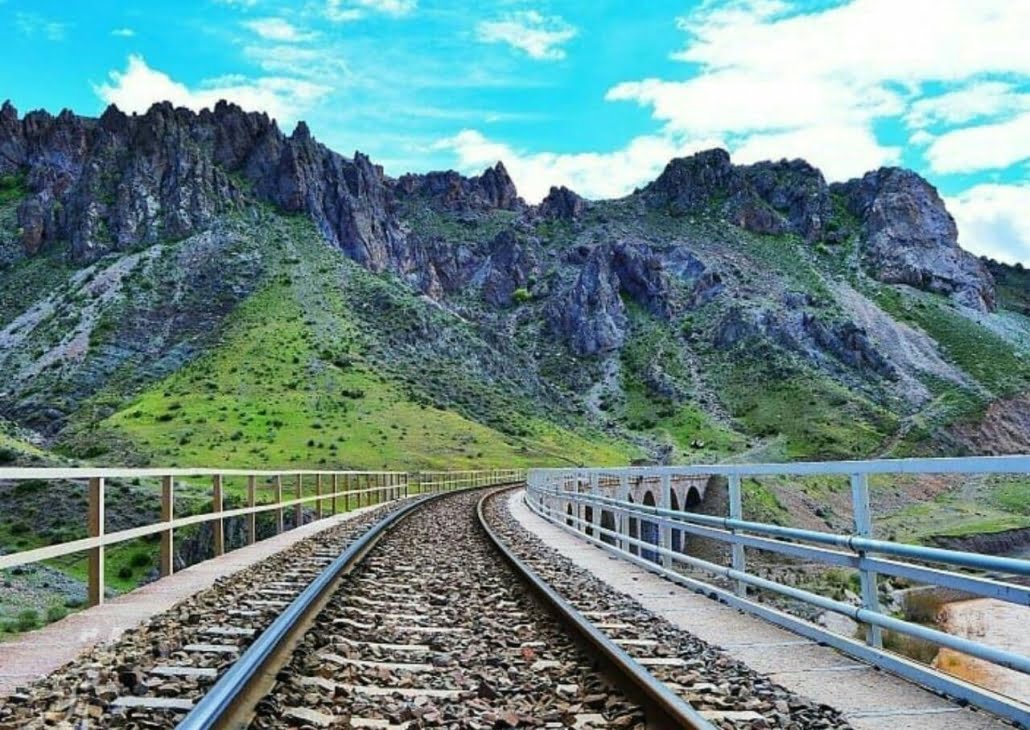 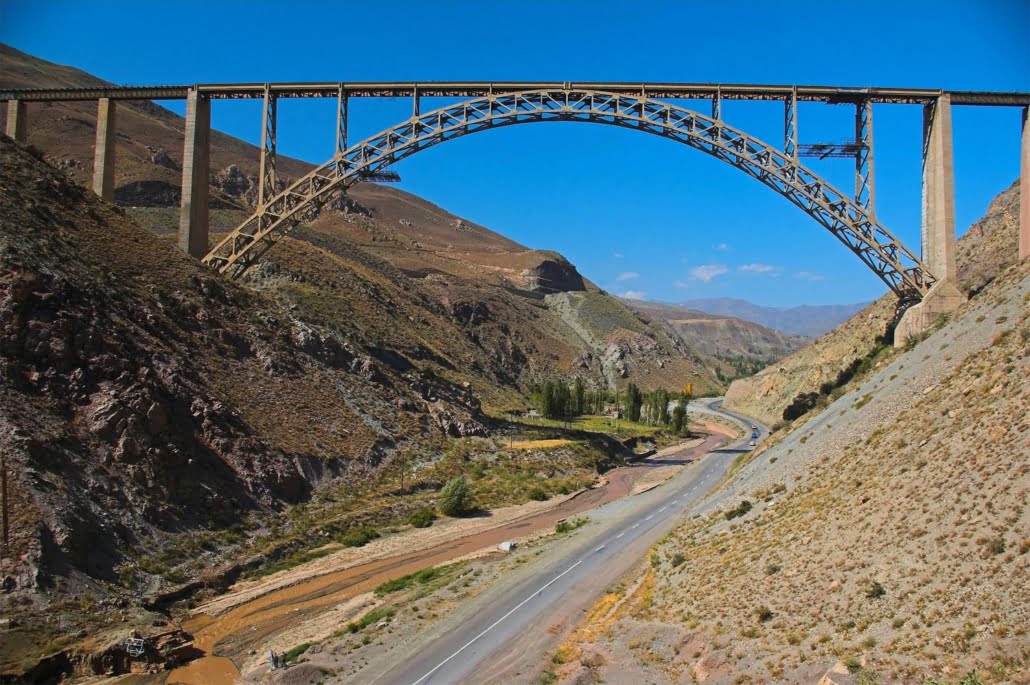 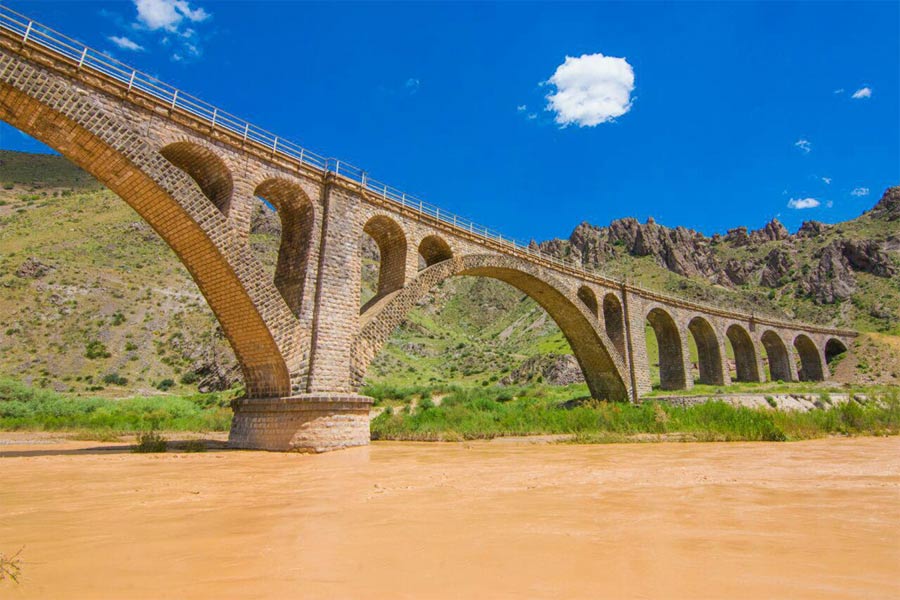 One interesting fact about the Tehran- Tabriz railway is that the station buildings and other structures follow a different style from the ones on the Trans Iranian Railway. These stone buildings can be seen in almost all the stations, while a good example of these old buildings are located in Sarcham station. Another noteworthy station building is the Maragheh Station which is also inscribed as an Iranian National Heritage.

After Sarcham station, the train enters the mountainous area. Passing Rej’eyn station, the Qezel Ozan river appears on the left side. Pay attention to the left side of the tracks when the highway splits and goes to the other side of the river. Here you can get a chance to take a look at the historical bridge called Pole Dokhtar. The name literally means the daughter’s bridge. It was believed in ancient times that calling a bridge or castel girl or daughter (same word in Persian) would make Anahita, the Persian goddess of fertility and water, happy. The bridge was restored by Reza Shah but in 1946, the main arch was exploded by the Azerbaijani Democratic Party to stop the Iranian army from advancing into Azerbaijan. Along with Pole Dokhtar, two other structures, the paved road bridge and the railroad bridges, were also exploded. Remains of the paved road bridge is visible close to Pole Dokhtar, but the railroad bridge was restored immediately and if you are lucky, you may be able to see its two beautiful arches when the train is turning towards it down stream (also on the left side).

After Mianeh, the old path continues, bypassing views of the river and orchards, until it reaches the city of Maragheh and continues toward Tabriz.

After Graduation of master’s degree in archaeology from Tarbiat-e-Modares university, he continues his researches as an industrial archaeologist. Meanwhile the brilliance of trans-Iranian railway grabbed his interest resulted in five years exploration to figure out the railway’s hidden social, constructional and functional attractions. By discovery of these potential capacities in tourism, he has been known as innovator of Iranian Railway Tourism. And now it’s about five years that he invites tourists to share with his unique experiences.

Iran gets ready for international tourists again
Scroll to top