Need A Reason To Go To Iran? Think Saffron!

Iranian Saffron known as the “red gold”, saffron is a magical ingredient in Persian culture, from aromatic foods and colorful desserts, to the physical and spiritual medicine.

Iranian Saffron known as the “red gold”, saffron is a magical ingredient in Persian culture, from aromatic foods and colorful desserts, to the physical and spiritual medicine. The expensive spice has long been a high-demand commodity and even triggered a war in 1374 in central Europe. But let’s take a closer look at saffron in Iran and see why you should keep it in your souvenir shopping list.

Where did saffron come from?

Greeks claim that saffron came from their land first, tell that to any Iranian and you will get a laughter! A stronger hypothesis says that cultivation of saffron first took place in Iran. The arguments on origins of the precious spice are endless, so let’s take a look at the fact that currently, Iranians are the biggest producers of saffron in the world (85% of the world’s saffron grown in a year, roughly about 390 tons!) The number is huge, considering that every 500 saffron stigmas weighs only one gram. 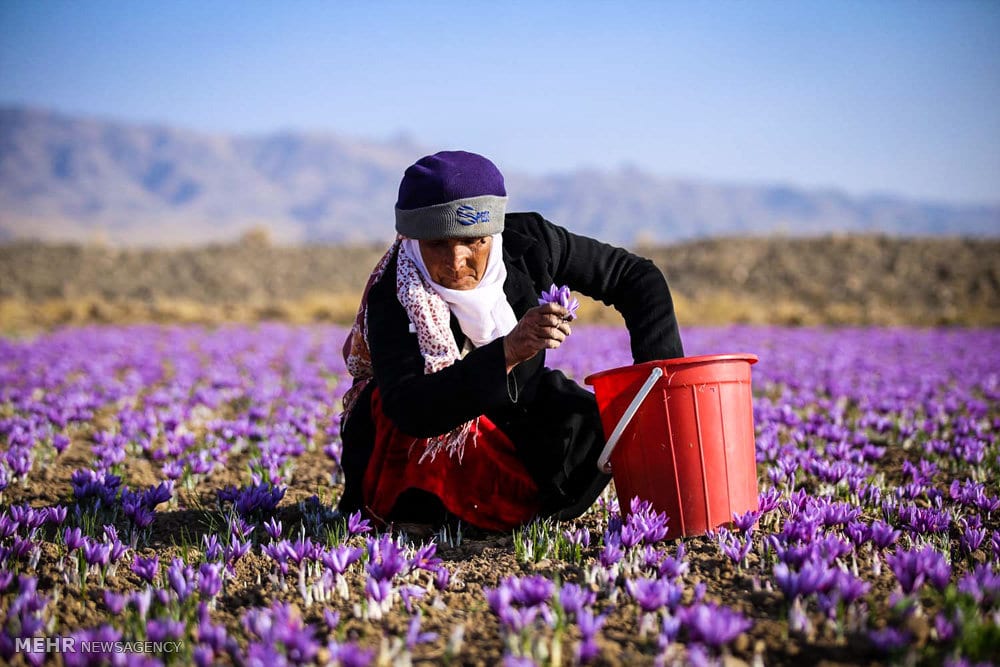 Every year, the saffron harvest season begins in early November. While most other vegetation are gone, the bright purple flowers cover the fields and create an outstanding landscape in dry regions in Iran. Major saffron producers of Iran are located in the east side of the country. If you would like to see the biggest market, head to Mashhad, which is also known for its religious importance. But if you are more curious about where saffron comes from, remember the cities of Gonabad, Torbat Heydariyeh, Taybad, Khaf, and Qaen. All of these cities are located in Khorasan region and their harvest season begin around November 1st, lasts about two, at most three weeks. Harvesting of saffron begins before sunrise, when flowers have still not opened up. Men and women head to the field and start picking the flowers as fast as they can, by the first rays of the sun, the flowers magically bloom in a sudden act. Work stops at around 9 AM when the flowers are taken to a shaded area to seperate. Everyone sits around a huge pile of flowers and carefully takes the three stigmas out. Remember the 500 stigmas for a gram of saffron? It takes about 167 saffron flowers to produce only one gram. That is why saffron is so precious. 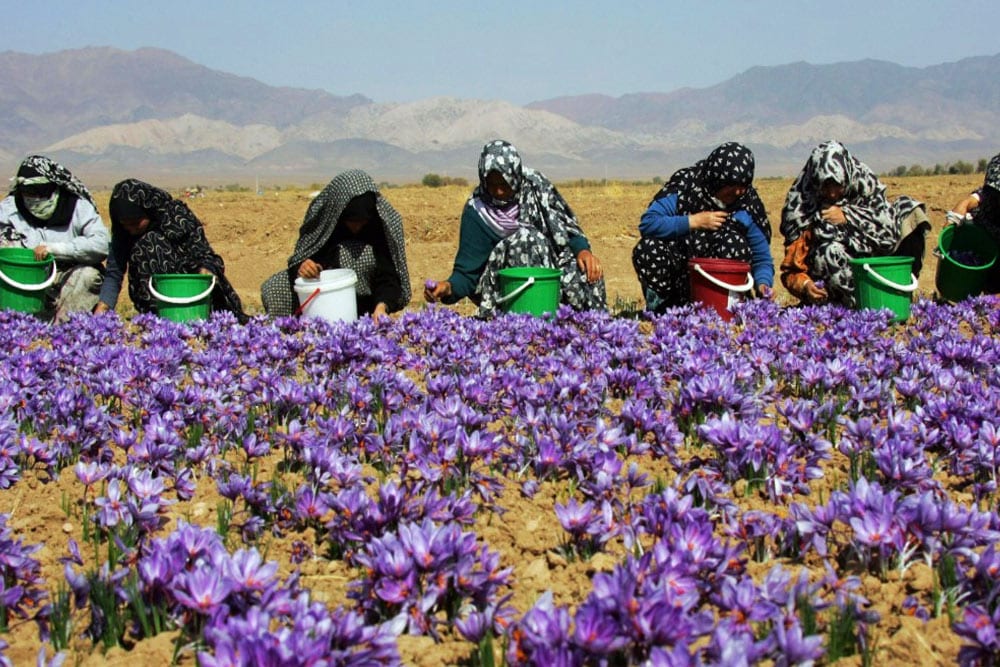 Saffron has long been used as a special seasoning in Iranian kitchens. A thin layer of saffron mixed rice on top of the white pile of rice and barberries, next to aroma and color of chicken kebab (joojeh kabab), all promise a welcoming hospitality. Iranians appreciate saffron and use it moderately, they believe that overuse of saffron can harm their mental health. They enjoy it in the flavorful saffron ice cream (Bastani Sonnati) in hot days of summer, or serve it in bowls of sweet rice pudding (Sholeh Zard) in religious ceremonies. Some people also make a refreshing herbal tea out of it, along with rose petals. 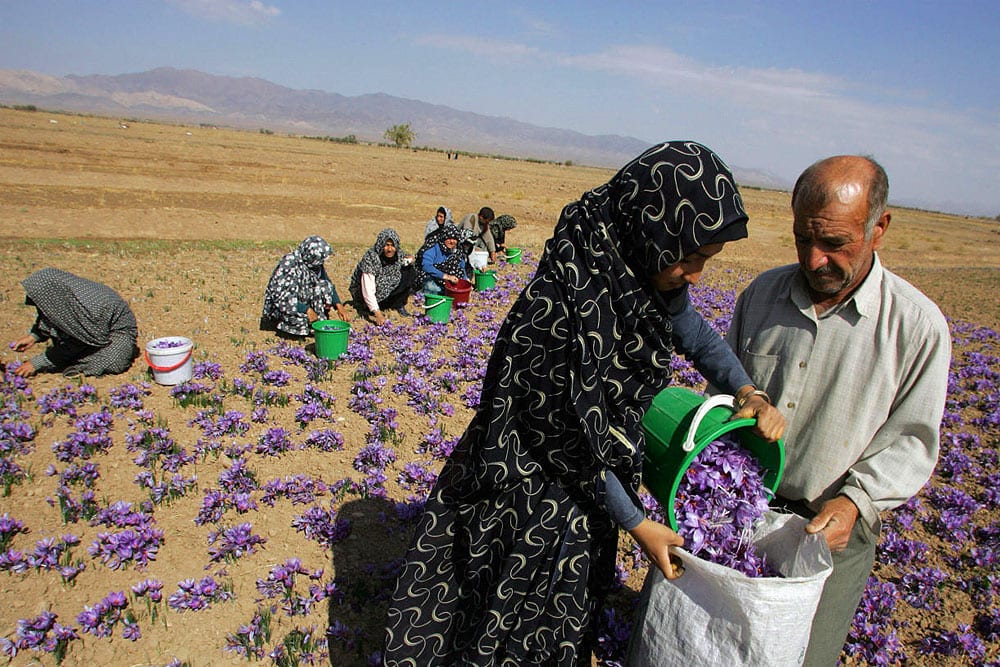 Saffron and its magical power comes in many traditions and rituals. Iranians believe that saffron eradicates sadness and depression. It is associated with happiness, so they use it in many sweets and food they make for the Persian New Year (Norouz). Ancient kings used to scatter gold coins and saffron among people in events of ceremonies or victories. In their palaces, saffron was used as perfume, medicine or as incense along with ambergris. Saffron was also used to color paper to be used for important letters or prayers, and to dye silk and other textile for the cloths of the royal family.

In Shahroud, in the province of Semnan, there exist a tradition called “Ab Do’a” (prayer water). Hours before the Norouz, in many mosques of the city, saffron is prepared to make a yellow ink. Calligraphers then use the ink to write 7 verses of Quran, all starting with the word Salam (greetings), on a floral porcelain plate. The plate is then submerged into a copper bowl full of water, so the yellow color disoves. This water is taken in small portions to the houses to be places by the Haft Seen table set or to be drank by the ill. It is considered to have healing power for the illnesses and to bring good fortune for the family in the coming year.

Are you now considering a tour to the saffron land?

SurfIran operates two Saffron Tours to the saffron capital of the world. First saffron tour includes a trip to the city of Torbat Heydarieh, which is known for producing over 34 tons of saffron each year. According to the national television of Iran, there are 117 households occupied in the production process, many of them are small-farm owners. Torbat Heydarieh also holds saffron seminars at the university and performs photography competitions to keep its status.

The second saffron tour is to the land of saffron and barberry, in the south of Khorasan. Visiting Birjand and Qaenat, you will have the opportunity to time travel to the ancient times, when silk road and spice road were connecting far nations to each other. Just imagine setting foot where the Italian merchant and explorer crossed over 700 years ago. You will be surprised to see much of that ancient history is still alive.

So, next time you are planning to visit Iran, think of saffron and reserve your tour for end of October till mid November. You may have the opportunity to participate in the harvest, share other activities, and directly purchase saffron and other goods from the locals.

What to do with the saffron you bought?

Keep saffron in an airtight container, in dark, cool and dry place. Do not keep it in the freezer, as the freezing temperature will reduce its aroma. Brew it before using it in cooking. Persians have different ways of brewing saffron. They grind the fragile stigmas in a small mortar, then mix it with hot water and put it in a warm place. Other people cold brew it. They put the ground saffron in a small bowl and put a piece of ice on it. As the ice melts, the astonishing dark orange color reveals. You can add some of this saturated aromatic liquid to a chicken or meat dish, or just like Iranians add it to some cooked rice to decorate the plate.

Take two or three stigmas and a few rose petals, put them in a small pot or large mug of hot, not boiling water. Let it brew for about 10 minutes. Enjoy it with a little bit of honey.

Grind a few stigmas of saffron and one cardamom pod, add it to milk and boil the milk till the color and the aroma reaches its highest. Enjoy it with some sugar or honey.