Zurkhaneh that literally means ‘house of strength’, is the traditional gymnasium of urban Persia and adjacent lands. Until the mid-20th century the Zurkhaneh was associated primarily with wrestling.

Descriptions of the Zurkhaneh often imply a timeless essence, while in fact the institution has constantly evolved and continues to do so. The traditional Zurkhaneh consisted of a building whose architecture resembled that of a public bathhouse, in whose close proximity it was often located.

The Zurkhane’s main room was often sunken slightly below street level to provide constant temperatures and prevent drafts that might harm the perspiring athletes, but its roof contained windows for light.

Access to the main room was possible only through a low door, forcing everyone to bow in respect while entering. At the center of the room lay the gowd, a hexagonal sunken area about one meter deep in which the exercises took place. 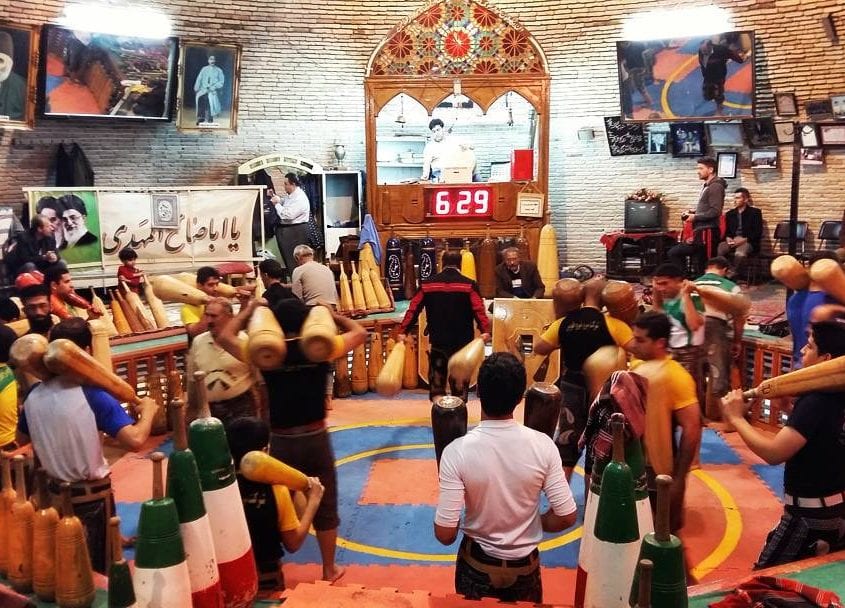 To provide a soft surface for wrestling, the bottom of the arena used to be covered first with brushwood, then with ash, and finally with a layer of clay earth, but gradually this was replaced with linoleum or wooden planks. The gowd was surrounded by stands for spectators and racks for exercise instruments, and the walls were adorned with pictures of athletes and saints.

Of particular importance was an elevated and decorated seat, the sardam, which was reserved for the man who accompanied the exercises with rhythmic drumming and the chanting of Persian poetry.

Since the early 20th century, the drummer has been called morshed (guide or director), a title previously reserved for the most senior member of the group. In the gowd, athletes had to be bare-chested and barefoot, symbolizing the irrelevance of outside hierarchies and distinctions

Their standard attire was the ‘long’, a cloth wrapped around the loins and passed between the legs. When they were wrestling, leather breeches (tonbān) were worn; these were sometimes embroidered.

As they entered the gowd, athletes showed their respect for the hallowed space by kissing the ground, which in practice took the form of touching the floor with their fingers and then raising these to their lips.

Once inside, they had to desist from eating, drinking, smoking, laughing, or chatting. Until the mid- l920s, men went to the Zurkhaneh in the morning after morning prayers, except during Ramadan, when exercises took place in the evening after breaking the fast (eftar). Since then, however, evening sessions have gradually become the norm. 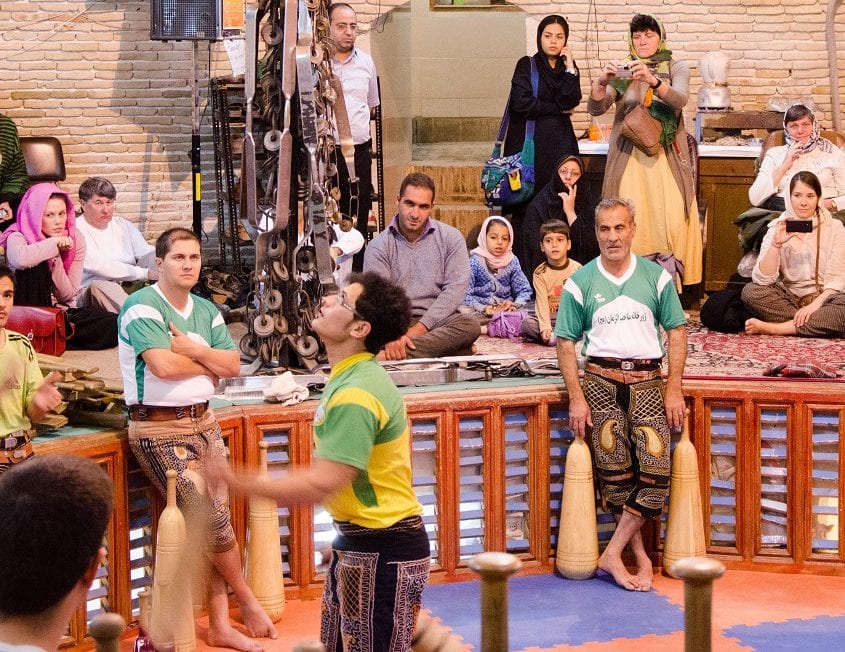 The exercises took place in a more or less standard order, and were led by the most senior member present, the midndiir. After some warming-up calisthenics (piizadan), in the course of which one of the athletes might leave the gowd, lie on his back, and lift heavy wooden boards called sang with each arm, athletes did push-ups (Shena) and then swung mils (Indian clubs), both exercises being accompanied by the morshed’s drumming and chanting.

They would then take turns whirling rapidly (charkh) about the gowd, after which one or two athletes would in turn step forward to swing a kabbiida above their heads, this being a heavy iron bow on the cord of which heavy rings are strung. 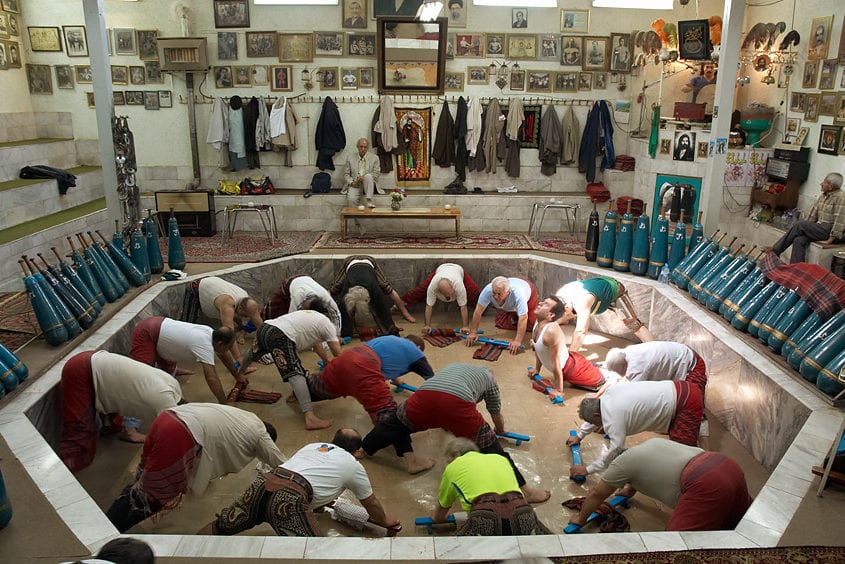 In the individual exercises (charkh and kabbida), members came forth in ascending order of seniority, and so, uniquely in Persian social convention, humility was shown by trying to go first. To come forth, an athlete would ask the miāndār for permission by saying rokhsat (permission), to which the answer was forsat (chance, opportunity).

The origin of the Zurkhane

The origin of the Zurkhaneh is shrouded in mystery. Its vocabulary, rituals, ethos, and grades recall those of fotowwa (javanmardi) and Sufism, but a direct affiliation cannot be established at the present stage of knowledge. Since wrestling has an old tradition in west, central, and south Asia, it is possible that sometime in the 14th or 15th centuries wrestlers formed guilds and adopted rituals borrowed from fotowwa and Sufism.

Wrestlers were mostly entertainers with low social status, and so perhaps this of noble ideals was an attempt to acquire greater respectability. The synthesis of wrestling prowess and Sufism is embodied by the 14th-century Pahlavan Puria-ye Wali, whom Zurkhaneh athletes (as well as wrestlers in Turkey) regard as a role model.

Zurkhaneh might have died out completely had it not been for the nationwide millenary celebration of Ferdowsi’s birth in the summer of 1934. Exhibitions of Zurkhaneh exercises featured prominently in them, and thenceforth the state showed more interest in them. Until about 1938 the term varzesh-e qadim (old sport) was used to designate Zurkhaneh exercises, but then gradually the term varzesh-e bastani (ancient sport) caught on, implying a pre-Islamic origin for the exercises. When in 1939 the crown prince married Princess Fawzia of Egypt, the wedding celebrations included exhibitions of “ancient sport” as part of the mass gymnastic displays in Tehran’s main stadium, a practice that was continued until the end of the monarchy. In 1941 Radio Iran started broadcasting Zurkhaneh poetry and drumming in the morning, allowing amateurs to swing their Indian clubs at home. 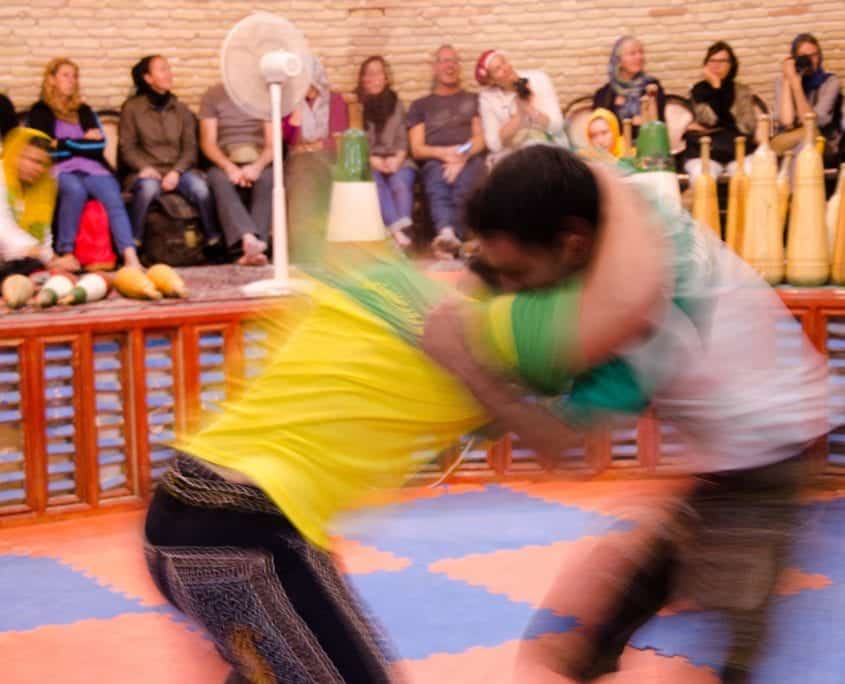 After the Revolution of 1978- 79, the authorities of the Islamic Republic emphasized the Islamic character of the institution and tried to popularize it again. To attract young people, boys were permitted into the gowd, and even though women are once again barred from attending the Zurkhane, athletes have been made to wear tee shirts.

To prevent any injury to athletes, the whole edge of Gowd is covered with stretchable rubber and /or wood. Around the Gowd, some stands for spectators and an special place for sport equipment are devised. Equipment of Varzesh-e- bastani (literally traditional sport0 which are used at the present in Zurkhaneh include Sang (literally means rock), Push-up board, Indian club and Chain and Bow (kabade).

Sardam is a sacred and respectable place where the Morshed ( coach) can perform rituals of Zurkhaneh for inside and outside spectators having control over sacred gowd. It is a custom for sardam to be decorated by peacock and dove’s feather since these feathers were used by warriors and commanders on their helmets in the past. 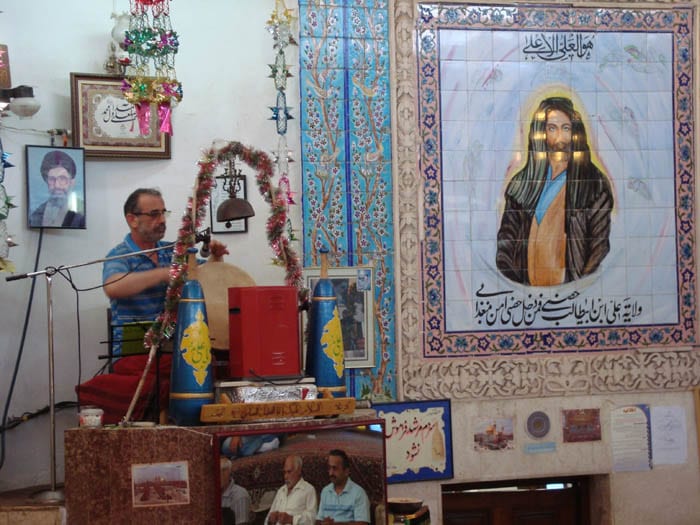 The face of sardam stand is worked with marble and/or walnut wood and above it a boot is made and decorated with an arch of triumph. Seat of Morshed is near the entrance door and on a relatively high stand with crescent or square form arch on which some bell’s is/are hanging.

Zang (bell) of the Zurkhane

The bell which is used for more harmonious exercises of athletes and coach as well as change of exercise techniques, is like an upside down copper bowl from middle of which a bar is hanging which creates a nice sound when hit to the walls of bowl. 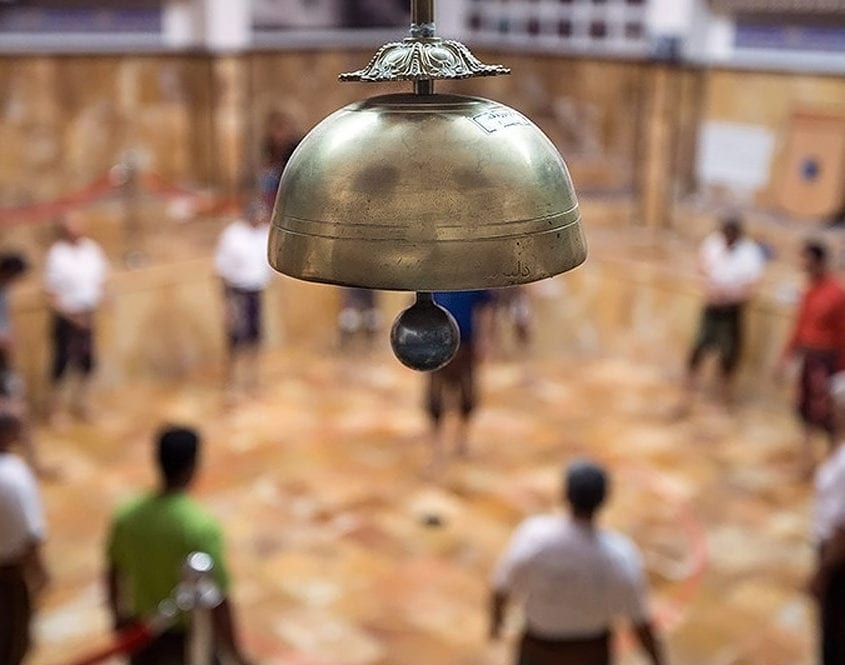 Zang (bell) of the Zurkhane

Morshed on entrance of an important person or outstanding athletes and pioneer to the Zurkhane, rings the bell and beat the drum and chants proper and epical poems on nationalism and remembrance of holy people.

Zarb (Drum) of the Zurkhane

Drum of morshed is like a tambourine made of clay with a broad opening covered with a thin tanned skin and by rhythmic beating on which Morshed causes rhythmic and harmonious exercises and movements and tries to create interest and eagerness in athletes and spectators. 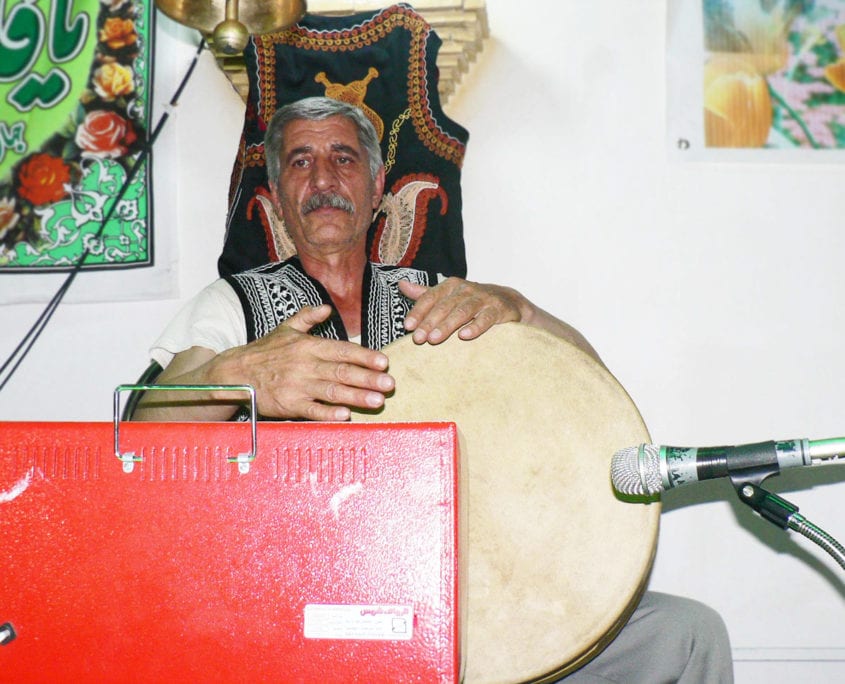 Zarb (Drum) of the Zurkhane

Exercise leader is an elite athlete who conducts Varzesh-e bastani’s operation and coordination with Morshed and the other athletes inside the Gowd have to follow him.

Mil is equipment made of wood in bottle form weighing 10-30 kg. Its shape resembles mace and has its root in ancient time, since Varzesh-e Zurkhaneh was one of the Fotowwa (fairness) group’s asceticism, they would use this equipment (that in western countries are known as Indian clubs) to fit their body.

This device was probably like an iron or wooden mace at the beginning and was used for body building and fighting by mace. Wooden clubs which are still used are made of strong woods like elm, walnut, and ash. Mils are in three types: 1- Entertainment mil weighing 2 kg with 65 cm height. 2- Light mil weighing 3 kg with 70 cm height. 3- Heavy mil weighing 15 kg with 110 cm height. Entertainment club is smaller and shorter than other clubs so that may be used for playing and throwing up.

It is one of the Varzesh-e bastani’s equipment. Its shape is the same a war bows.

The equipment used frequently in Zurkhaneh at the present as Sang are two pieces of large boards in form of heelpiece of old shoes which is square in upper part and curvy at the end. 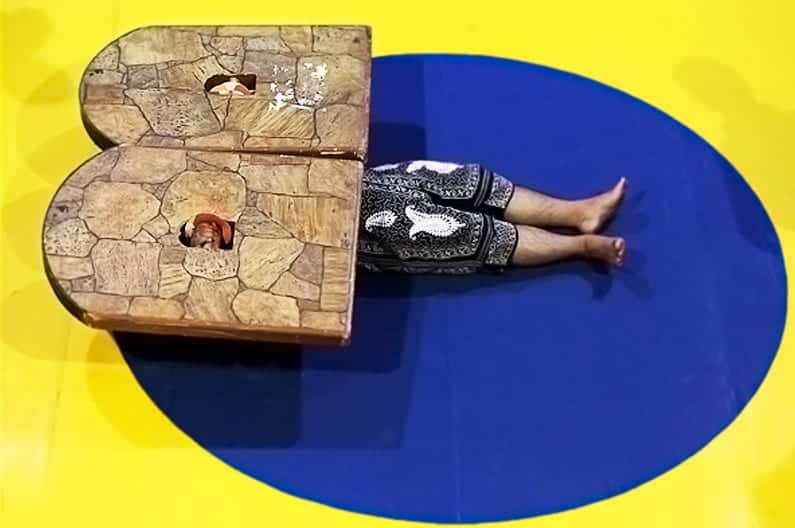 At the middle of each Sang there is a hole and a handle on two sides of which a piece of moquette is pasted to prevent scratching of athletes hands.

One of the exercises in Zurkhaneh is push-up (Shena). Morshed after chanting introductory song rings the bell and beats the drum continuously. 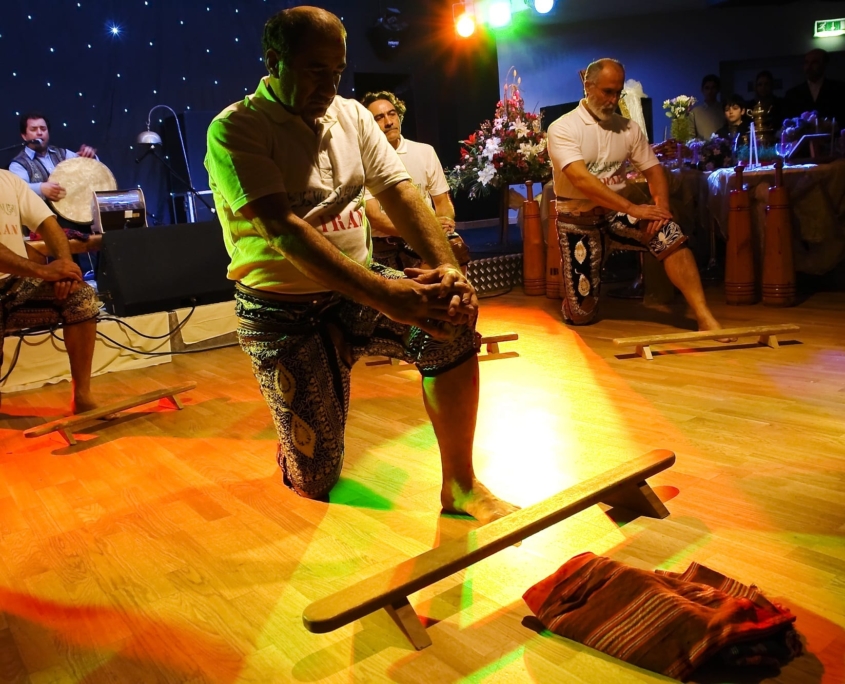 The athletes put the push-up board before themselves and put their hand on it and following their Miandar (senior athlete) do some exercises holding their heads up.

List of some of the active Zurkhaneh in Tehran 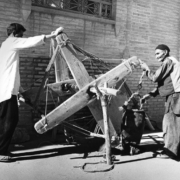 Tangible And Intangible Heritage Of Qanat 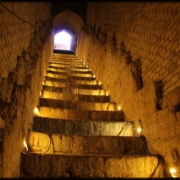 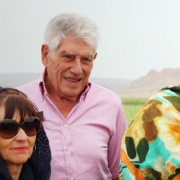 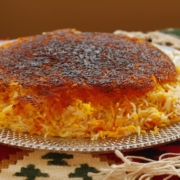 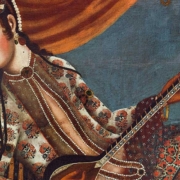 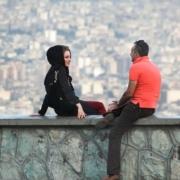 Can you travel to Iran as an unmarried couple?
5 replies

Can you travel to Iran as an unmarried couple?
Scroll to top