Welcome to Iran, the country of historical monuments from ancient to contemporary era, beautiful villages, and a wide range of especial food, cradle of art, culture and archeology.

Eating food is one of the most charming choices all around the world especially when you have decided to travel to Iran. Iran as the cradle art and culture welcomes you warmly with a variety of culinary art. Arts of preparation, cooking and presentation of food usually in form of meals is a magical masterpiece that you go through during your travel from north to south, west to east.

Traditional Iranian food, which is made up of delicious ingredients, is extremely diverse and mouth-watering.

The fact that is hidden in all Iranian food is both healthy and nutritious which deserve your attention day in day out such as “Kebab”, different stews like  “Gorme-Sabzi”, “Gheime”, “Zereshk-Polo” or as you imagine.

Abgoosht or dizi is a Persian soup or stew that is traditionally prepared with lamb, chickpeas, white beans, potatoes and tomatoes.

“Dizi” also known as Abgoosht, a favorite food among Iranian people, is cooked with lamb, chickpeas and of course tomato. It is interesting to know that it dates back to several hundred years ago.

“Ash” as another food which is mostly served in cold months of the year has remedial effects on the body. Then do not hesitate to try it for its taste and also for its health benefits.

Ash as a traditional food in Iran not only is it delicious but also it is very useful for the body. The fresh vegetables used in the food give you a lot of vitamins and the food is a nutritious source as you need. The extraordinary healing power of the food makes you energetic. All ingredients used in the food like chickpeas, lentils and beans are great source of protein and fiber.

Ghorme Sabzi (ghorme sabzi,qormeh sabzi) is a popular stew in Iran, the land of delicious foods. The savory, tasty and yummy stew is made up of a mixture of fresh herbs such as parsley ,cilantro which are usually fried before being cooked with other ingredients like beans, onions, lamb or meat and of course black lime that is originated from Persian Gulf  and gives a unique taste to the stew.

Never ever forget to try tahdig (crunchy rice) when travelling to Iran. It is mostly served with rice and stew.

Gheime a very famous Persian food, called yellow split peas stew in English, refers to a mysterious mix of cubed meat, split meats, extract of tomato, fried onions and spices such as salt, pepper, ground cardamom and turmeric, garnished with fried potato and saffron that really makes it mouth-watering and tasty. Also it is famous as a religious food especially in Ashoora distributing among ordinary people or poor ones.

It is wonderful to taste and to try the most amazing traditional food in Qazvin named Gheime Nesar. This flavored high demand food is served in most famous restaurants in the city which is a proof of its popularity.

Gheime Nesar (Persian Jewelled Rice Lamb is basically a combination of rice, meat, barberries, silvered nuts and orange peel that gives an unforgotten taste to the food that perhaps you have not eaten it anywhere else.

Qazvin is really the city of sophisticated cuisine and fabulous food and sweets.

Do you aspire to try IRANIAN FOOD?

One of the most popular dishes of Persian cuisine, a good combination of saffron, turmeric and fried dried barberries on the top of the served dish. Saffron is like a miracle in all Iranian food and of course in Zereshk-Polo (dried barberry with rice).

Iran is the land of kebab with a wide diversity of delicate and delicious recipe.

Chelow kebab (grilled meat with rice) which is really well known among Iranian people has big fans, the food that is normally served with fresh vegetables and Doogh, an Iranian drink, and sometimes with traditional Iranian bread named Sangak or saffroned Iranian rice.

It is famous as the Iran’s signature kebab, made of ground lamb, beef mixed with chopped onions .In order to have a homogeneous ingredients, Iranian people are used to smash it by hand or a wooden mallet.

If you are interested in tasting Iranian chicken in a restaurant, Joojeh Kebab could be a good suggestion for you. A food, which barbecued with tomatoes, saffron and olive oil.

Truly mouth-watering and a rich source of iron, try to give it a try once in a restaurant to make one of the most memorable moments of your trip.

A delicious food made up of fillets of beef, lamb, onions, saffron, olive oil and mild spices. 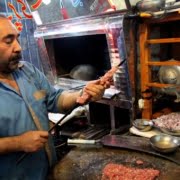 What Could Be Better Than A Kebab Festival? 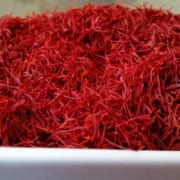 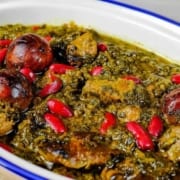 Best “Chelo khoresh” Dishes You Must Try In Iran 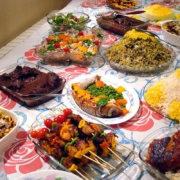 Iran on a Plate: Iran Food and Travel Guide 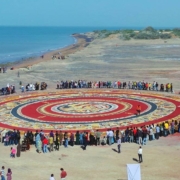 Hormoz - An Island With Edible Soil in Iran
0 replies

Jolfa – The Armenian Quarter of Isfahan
Scroll to top